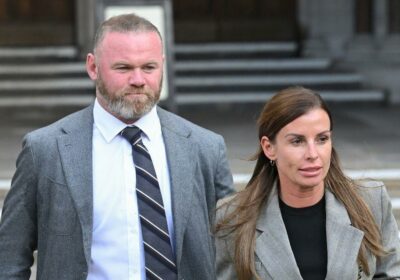 Wayne Rooney thinks Jamie Vardy should have had the "guts to take the stands" in the ongoing Wagatha Christie trial.

Earlier this week, in a statement outside the court, Jamie said Wayne "must be confused" as he refuted his claim they met to discuss his wife Rebekah Vardy and her public behaviour during the Euro 2016.

And now, a source close to Wayne has expressed: "Wayne feels Jamie should have had the guts to take the stand and say on oath what he wanted to say.

"That way, he could have been questioned on who was telling the truth. Instead, he just made his statement outside the court and scuttled off with Becky," it was added to The Mirror.

A separate source told the publication that 40 year old Rebekah would have seen all of Rooney's evidence when all the witness statements were disclosed weeks before the hearing.

"If Jamie thought Wayne was not telling the truth, then he could have prepared his own statement and given it from the witness box like Wayne did," it was added.

OK! has contacted a representative for Wayne for further comment.

This comes after Wayne, 36, claimed that ex-England gaffer Roy Hodgson and assistant manager Gary Neville asked him to have a word with Jamie about his wife, with the aim of getting Rebekah to behave better during the Euro 2016.

He explained it was as a result of apparent "negative media coverage" surrounding the mum-of-five, along with other "issues" that were said to be "causing problems and distractions for the England team".

Speaking outside the High Court in London, Jamie said in a statement: "He must be confused because he never spoke to me about issues concerning Becky's media work at Euro 2016."

The star went on to say there had been "nothing to speak about".

"I know this because I discuss everything with Becky," he added.

Giving evidence in court, Wayne said the players had sat down together for a chat in the games room, where the Derby County manager had a coffee and Jamie sipped on a can of Red Bull.

When asked to confirm if he was telling the truth about having the conversation with Jamie, Wayne insisted he was "under oath" and he "100 per cent spoke to Mr Vardy on the situation".