WATCH: The moment Prince George and Princess Charlotte walk behind their great-grandmother’s coffin 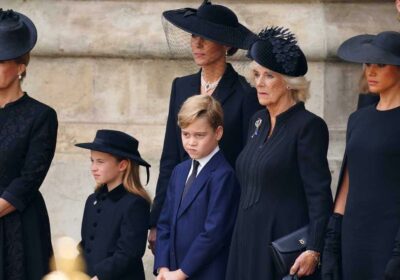 There were touching scenes as Prince George and Princess Charlotte walked behind their great-grandmother’s coffin at the late Queen Elizabeth II’s state funeral at Westminster Abbey on Monday morning.

RELATED: The last-minute change to the Queen’s funeral procession

Prince George, nine, and sister Princess Charlotte, seven, put on brave faces as they made the emotional walk alongside their parents, the Prince and Princess of Wales, as Queen’s funeral procession left the Cathedral.

The young pair were due to walk behind their parents in the funeral procession, but a last-minute change saw them walk alongside the Wales’.

Before the ceremony, Princess Charlotte was seen being comforted by Princess Kate, who gave the young royal a comforting touch as a show of support as they walked the procession together.

MORE: Royals including Prince George and Princess Charlotte sing God Save The King for the first time

The two eldest children of the Prince and Princess of Wales were pictured arriving ahead of the service with their mother, Kate, and great-grandmother, Camilla, Queen Consort.

Princess Charlotte looked elegant in a black wool coat by Ancar and a Jane Taylor hat. Her brother, Prince George, opted for a smart navy suit.

Their younger brother, Prince Louis, was not present at the service, however, and was likely to be considered too young to attend the ceremony.

The service was conducted by David Hoyle, the Dean of Westminster, with Prime Minister Liz Truss and Patricia Scotland, the secretary-general of the Commonwealth, reading Lessons.

Also in attendance at the late Queen’s funeral were the Duke and Duchess of Sussex, the Princess Royal and the Earl and Countess of Wessex, along with various heads of state, prime ministers and presidents, European royals and key figures from public life moreover gathered to celebrate the life of Her Majesty.