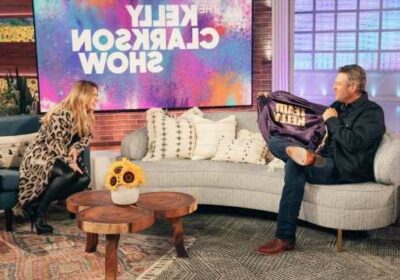 The talk show host then asked Shelton if he wears the jacket she gave him for the same honor this past September.

“Oh my god [all the time],” the 44-year-old country singer insisted. “I feed the chickens in it.”

A skeptical Clarkson fixed Shelton with a stare and said, “So it’s probably dirty. Really? Really?”

She then revealed that the jig was up, sharing, “You know what’s interesting. You left your jacket here. In the green room, actually. You actually neglected to even throw it away after leaving the building.”

A crew member then brought out the jacket for Shelton, who said, “Oh! There it is. I’ve been looking for this.”

“Here’s the thing, when you don’t like a gift, you wait to leave the building to throw it away,” Clarkson told Shelton.

“I always leave the crap you give me here!” Shelton admitted. “I don’t want you to waste it on me!”

Earlier this month, ET spoke with Clarkson and Legend about how they unwind as a cast.

“We do a dinner on the last night of the Lives,” Legend said of him and wife Chrissy Teigen hosting his fellow coaches in pre-pandemic times. “It’s the opposite of a party, though, it’s so chill. We just have dinner and have a glass of wine.”

For more fromThe Voice judges, watch the clip below: