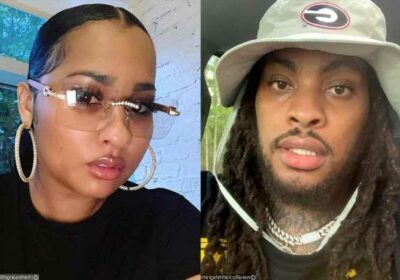 When addressing his separation from his wife, the ‘Hard in da Paint’ rapper also admits that he was not sure if he would pursue any other kind of relationship with her.

AceShowbiz –Waka Flocka Flame has finally addressed his split from Tammy Rivera. Around one week after the reality star confirmed their breakup, the “Hard in da Paint” rapper revealed where things stand now between them.

The emcee opened up about his relationship with his now-estranged wife when appearing on the “It’s Tricky With Raquel Harper” podcast. He first said, “That’s my best friend, that’s my dog… People just want it to be fighting and hating and something happened. Hell no, we’re just grown.”

“Why is it that, when people evolve for the better, why does there have to be something attached to it that’s slimy as spit? … Why it gotta be so nasty if we ain’t nasty?” the 35-year-old emcee noted. “It’s love though, me and Tammy stamped.”

During the interview, Waka admitted that he was not sure if he would pursue any other kind of relationship with Tammy. It’s because he believes that “anything other than that [marriage] might be toxic.”

Tammy, who has a daughter called Charlie from a previous relationship, confirmed their split during an Instagram Live earlier this month. “Waka and Charlie is good. Really good. They are together all of the time. He just picked her up a cell phone without me knowing. I feel like we gotta co-parent,” she said.

“We didn’t even co-parent good when we were in the same damn household,” the TV personality, who tied the knot with the rapper in May 2014, continued. “It ain’t gon be no better now that we’re separated and in different households. He still do what the hell he wanna do. But that’s his baby so I understand.”

Before ending her livestream, the former “Love & Hip Hop Atlanta” star once again assured fans that she and her now-estranged husband are in a good place despite the split. “Y’all not about to Waka me to death with no damn questions talking bout Waka and all that stuff. I said the man fine. Him and Charlie good. We good. We are not together and that’s cool. We’re good, we’re in good spaces,” she pointed out.