Vicky Gunvalson Gushes Over ‘Perfect’ and ‘Incredible’ New Boyfriend: ‘It’s Been Like Disneyland’ 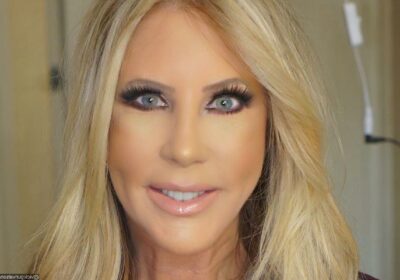 The former star of ‘The Real Housewives of Orange County’ reveals that she and her new beau actually exchanged numbers about six years ago but she quickly forgot about him.

AceShowbiz -“The Real Housewives of Orange County” alum Vicky Gunvalson is officially off the market. The reality TV star gushed over her new boyfriend during her appearance on Access Hollywood’s “Housewives Nightcap” series.

Of her beau, Vicky said, “He’s the first man that has ever really treated me to anything. He’s like, ‘I got that. You’re not paying for that.’ … I’m like, ‘Are you, like, real?’ ” While she didn’t reveal his name, she shared that he’s from Texas.

“He’s freaking incredible,” the 59-year-old went on to rave. “I gave him an 18 [item] list of what I want in my next person because [through] all the books you read and all the self-help, you manifest your person right? So, I manifested him and he had everything but one [quality I wanted], including wearing cowboy boots and loves country-western music. He doesn’t have a boat and I’m like, okay, I’ll take that one off.”

Vicky noted that they actually exchanged numbers about six years ago but she forgot about him. It was thanks to her former “RHOC” co-star Kelly Dodd that they were able to hang out in person.

“He’s like, ‘You and I met six and a half years ago and you didn’t give me the time of day.’ And I go, ‘We did not.’ He goes, ‘Let me call your number.’ He calls it. Sure enough, his name appeared,” Vicky recalled. “I’m like, ‘I don’t remember you.’ He’s like, ‘Because you were preoccupied. … You were not ready. Are you finally ready to date me yet? I’ve been waiting.’ “

The TV personality likened her relationship with her new man to “Disneyland.” She elaborated, “I mean, really, in my mind, I’m just so happy. I’ve never had a man treat me like this and he is just quality — just a quality man.”