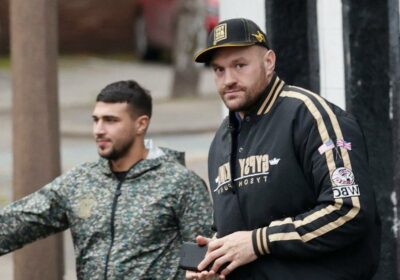 Boxing champion Tyson Fury was photographed out with his 22 year old brother Tommy afterallegedly taking two women out for an “eight-hour bender”.

Tyson, 33, is thought to be training his younger brother who’s set to fight YouTuber Jake Paul in December.

The two brothers were spotted out and about in Morecambe after going out to a local sandwich shop for breakfast together.

Tyson towers over his brother Tommy, standing at an impressive 6ft 9. Tyson fights in the heavyweight boxing division, while 6ft tall Tommy competes in the light heavyweight.

Tyson was seen wearing a pair of jeans, a cap and a jacket reading ‘Gypsy King’ on it, while Tommy wore a pair of black shorts and a camo jacket.

Stella Kabelis, 21, and Kailah Downie, 24, are said to have asked him for a selfie when Tyson’s friend later texted them to join them for a drink.

A friend of Stella and Kailah’s toldThe Sun: “Stella and Kailah were really starstruck and enjoyed a taste of the high life with him. He was a perfect gentleman and they have been telling their friends what an amazing time they had.

“They think Tyson is great. Stella and Kailah are normal hard-working girls who went out for a midweek drink and ended up doing shots and dancing with one of the world’s most famous sporting stars.

“They felt very lucky to be out with him and he was very complimentary to them and they loved his fun-loving personality.”

The news came after Tyson’s wife of 12 years, Paris Fury, spoke of the difficulties they face when going out in public because of Tyson’s fame.

Paris told OK!: “The kids love to go to theme parks but when there are so many people they come over and it stops the day, so we can’t do that as much any more."

Explaining what Tyson and Paris do with their six children, Paris continued: "It usually consists of going somewhere where there’s not lots of people, going for a walk or a bit of an adventure. A day at the park – get some food, have some ice cream. We love going up to Windermere and walk around the lake."

Paris and Tyson welcomed their sixth child, Athena, in August 2021.

For updates on all your favourite celebs, sign up to our daily newsletter here .