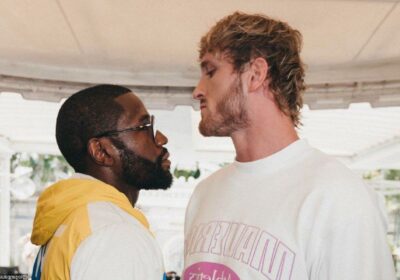 Many roast the YouTube personality for frequently hugging the former boxing champion to avoid getting beaten up, but his brother still declares the 26-year-old the winner.

AceShowbiz – Floyd Mayweather, Jr. and Logan Paul‘s much-talked-about fight turned out to be an underwhelming night. The former boxing champion and the YouTube star squared off in an eight-round exhibition on Sunday night, June 6 at Hard Rock Stadium in Miami Gardens, Fla., but the event had little action with Logan mostly going the distance with the ex-professional boxer.

Since it’s an exhibition fight, no winner was announced and the judges didn’t keep score, but the fighters combined to land just 73 punches, with Floyd landing the majority of them and Logan struggling mightily to find his target. According to Compubox, the 44-year-old connected on 43 out of 107 punches (40.2%), while the 26-year-old was 28 out of 217 (12.9%).

Needless to say, viewers both at the arena and at home were disappointed with the lackluster fight. Taking to Twitter, they expressed their dismay with one writing, “This how everybody finna be trying to get a refund for the #MaywatherPaul Fight.”

Many took issue with Logan, who frequently hugged Floyd to avoid getting beaten up during the fight. “Logan Paul might as well get this sponsor he deserves it,” one tweeted along with a picture of him hugging Floyd on the ring being photoshopped on a mock box of baby formula Huggies.

Another compared Logan and Floyd, who hugged “every 5 seconds,” to snuggly SpongeBob and Patrick of “SpongeBob SquarePants”. “I ilegally streamed the #MaywatherPaul fight and I still feel robbed,” another claimed, while some others compared the imbalanced fight to a child who is being scared away by an adult.

Meanwhile, Floyd admitted he “had fun” after the fight. “You’ve got to realize I’m not 21 anymore. I had fun moving around with these guys,” he said, while praising his rival’s performance, “He was better than I thought he was. This was fun.”

Logan also shared, “I want anyone to tell me anything is impossible ever again. The fact I’m in here with the GOAT means the odds can be beaten. Everyone can beat the odds and do great things. Floyd Mayweather, it was an honor.” He added of narrowly avoiding being knocked out by Floyd, “I’m going to go home thinking if he let me survive. It was the coolest thing ever.”