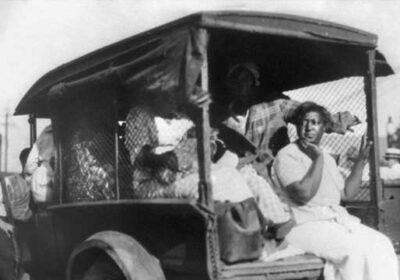 From May 31 to June 1, 1921, one of the single worst acts of racial violence in American history took place when mobs of white residents of Tulsa, Oklahoma, attacked the Black people and Black-owned businesses of the city’s Greenwood District dubbed Black Wall Street. During the two-day period, hundreds of Black people were murdered and 10,000 were left homeless and displaced as the area was destroyed.

“Black Wall Street was named that because there were bank owners, oil well owners, Black people who owned airplanes, etc. Those people were targeted because they were successful,” Dawn Porter, the filmmaker behind National Geographic’s Rise Again: Tulsa and the Red Summer, tells ET. “That’s not a story we have often heard.  I always wonder what else we don’t know.”

The attacks have since become known as the Tulsa Race Massacre. And in the 100 years since, the tragedy has become a forgotten crucial part of history that’s only been rediscovered onscreen in the past few years, thanks to the HBO series Watchmen and Lovecraft Country. Meanwhile, the murder of George Floyd on May 25, 2020 led to the re-emergence of the Black Lives Matter movement and ignited a conversation about the connection between these two incidents.

“One of the things we have to understand is that this history was purposefully erased. The white newspaper did not cover, they refused to print stories about it; it was not part of school curriculums,” says Stanley Nelson, director of History Channel’s Tulsa Burning: The 1921 Race Massacre. “It was purposefully erased, you know, so I think that it is important that we understand that.”

He adds, “I think that now that the story is coming to light you know it can’t be put back in the box. It’s going to be part of history from now on.”

Now, to commemorate the 100th anniversary, there are three new documentaries from History, National Geographic and PBS chronicling and re-examining the events leading up to and during the actual massacre while also looking at the larger context of racial violence and social injustice in America and how the country — and specifically Tulsa — is reckoning with its past.

While Nelson feels that a documentary about the Tulsa Race Massacre is evergreen and could have come out at any time, “I think it’s especially important now,” he says. “It’s especially important as this country is doing a bit of introspection about how we got to where we are and why we got to where we are following the George Floyd killing and the protests we went through last summer.”

That said, “It’s important that people know that it happened and that people know why it happened. That Greenwood was not the only place where African American lives and businesses were destroyed but that’s something that occurred and re-occurred throughout this country,” the filmmaker continues. I think it’s really important that we understand that so that we understand how we got to where we are today.”

Here’s a look at (and how to watch) three films shining a light on the Tulsa Race Massacre:

Executive produced by NBA star Russell Westbrook and directed by Emmy-winning filmmaker Stanley Nelson and Peabody Award winner Marco Williams, the documentary focuses on a specific period, from the birth of Black Wall Street to its catastrophic downfall over two bloody days and then the fallout and eventual reconstruction. Notably, it highlights the amazing spirit the people had in building this community and the pride they had in the neighborhood before it was destroyed. The two-hour film also chronicles the city’s current-day grave excavation efforts at Oaklawn Cemetery where numerous unmarked coffins of victims have been recovered.

Additionally, the History Channel is partnering with WNYC Studios to launch a new six-part podcast series Blindspot: Tulsa Burning on May 28. And through its “Save Our History” philanthropic initiative, the network is helping to preserve the Historic Vernon A.M.E. Church, the only standing Black-owned structure from the Black Wall Street era.

“The Tulsa Race Massacre was not something I was taught about in school or in any of my history books,” Westbrook said in a statement. “It was only after spending 11 years in Oklahoma that I learned of this deeply troubling and heartbreaking event. This is one of many overlooked stories of African Americans in this country that deserves to be told.”

After directing John Lewis: Good Trouble and The Way I See It, filmmaker Dawn Porter is turning her attention to the massacre by recounting what happened over the two-day period while exploring the early 20th century period in America known as the Red Summer, when multiple acts of white supremacist terrorism and racial riots took place leading up to Tulsa. The film also documents the investigation of mass graves found in the area as the city faces revived calls for justice for victims and survivors.

While the other films are premiering ahead of the 100th anniversary, Porter’s documentary debuts ahead of Juneteenth, a day commemorating when the last enslaved Black people in Texas were finally emancipated. It will also be available for streaming starting June 19 on Hulu.

“I learned so much from making this film,” Porter says. “I had no idea how many massacres there were across America during this period, but the biggest lesson was how Black men and women continued to rebuild and resist oppression and suggestions that they were inferior. They refused to accept inequality.”

Tulsa: The Fire and the Forgotten

Produced and directed by Jonathan Silvers, narrated by Emmy-winning journalist Michel Martin and with reporting by Washington Post journalist DeNeen L. Brown, the 90-minute documentary explores the 1921 tragedy, the history of anti-Black violence and Black resilience in the time since. It also documents present-day efforts to memorialize the Tulsa Race Massacre while Brown sits down with descendants of Greenwood residents, business owners and community activists for candid conversations on the demands for reparations and the efforts to revive the Black district of Greenwood.

“Stories have power and if they’re told, they can change the future and they can provide some healing. So my goal here would be to finally find answers for some of the descendants of the victims, and if they do find bodies, put those souls to rest,” Brown said in a statement.