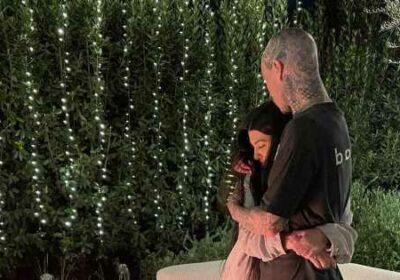 Kourtney Kardashian and Travis Barker have been lighting up social media with their sizzling display since going Instagram official with their relationship on Valentine's Day.

The pair were friends for years before turning their relationship romantic, and the loved-up pair can’t keep their hands off each other.

Blink-182 star Travis has now referred to Kourtney as the “love of his life” while on holiday in Disneyland.

The star took to his Instagram page to share an adorable snap with the Keeping Up star, while riding the King Arthur Carousel.

Travis, who recently received a sweet tattoo from Kourtney, captioned the photo: “Happiest Place On Earth.”

And Kourtney was quick to take to the comments section to reply: “happiest” with a love heart emoji attached.

It was then that Travis replied to Kourtney’s comment saying: “with the love of my life."

Kourtney and Travis has packed on the PDA since the confirmation of their relationship, and Kourtney’s pal Tracy Romulus is clearly witnessing the romance too.

Underneath once Kourtney and Travis’ snaps, she penned: “Can we start wedding planning yet? You guys are the cutest.” Should the 45-year-old musician decide to get down on one knee in the future, an experts told OK! that the 42-year-old mum may favour a “timeless” engagement ring design – not unlike the classic, albeit gigantic, cushion-cut sparkler her younger sister, Kim, accepted from now-ex Kanye West in 2013.

“Kourtney’s refined style would lend itself to something with classic, clean lines and a traditional centre diamond, like an emerald or round cut on a solitaire or pavé setting,” Shannon Delany-Ron, the CMO of JamesAllen.com, said.

But Kardashian’s been dressing noticeably edgier since she began dating her rocker beau, stepping out for dates in T-shirts adorned with explicit song lyrics, head-to-toe vinyl and more – not to mention shocking fans with those steamy Instagram snaps.

”[She] could very well surprise us all with a fancy-shaped diamond ring with some added accent details,” Delany-Ron added.