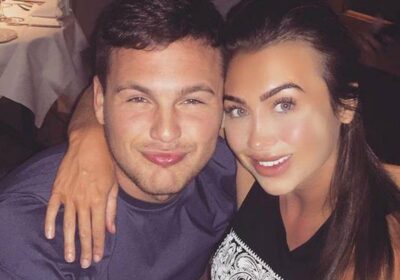 TOWIE's Sam Mucklow has led tributes to his friend Jake McLean as his funeral took place today, Tuesday 16 August, six weeks after he tragically lost his life in a car accident in Turkey.

The car the 33 year old businessman was driving crashed off a cliff in Bodrum, Turkey on Sunday 3 July, and whilst Jake died, his on-off girlfriend TOWIE's Yazmin Oukhellou, 28, who was in the car, miraculously survived the crash.

As his friends and family, including Former The Only Way Is Essex stars Lauren Goodger and James Argent, gathered today to lay him to rest, some of his famous friends, including former Love Island star Georgia Harrison, 27, and TOWIE's Sam Mucklow have posted on Instagram in tribute.

Sam, 30, posted a number of throwback snaps of him and his close pal to his Instagram stories, first sharing a picture of the two of them sat on the side of a yacht with their legs dangling down to the sea, and Sam added a broken heart emoji. Next to another snap of the pair, Sam wrote: "Jakey boy. You played a huge part in my life over the years, helped shaped the person I am today. Love you J."

A third photograph showed them at a nightclub partying with friends. Underneath the snap, Sam heartbreakingly wrote: "The day has come that we lay you to rest in paradise Jake and celebrate your life. "You're always in my mind and will forever be in my heart."

Sam tagged a friend, Georgie Dark, in another post, and she paid tribute to Jake on her own Instagram stories, writing: "Will be thinking of you and your family… I can't believe you're not here anymore."

Jake's ex-girlfriend Georgia didn't pay tribute by directly mentioning Jake, however, she did post a number of hearfelt quotes to her Instagram stories, with one reading: "When we lose someone we love we must learn not to live without them, but to live with the love they left behind." Georgia shocked her fans after Jake's death, as she revealed they were previously in a relationship and posted a number of photographs and tributes to him, before later expressing her "regret" at making her feelings surrounding his death so public. Not pictured at Jake's funeral was Yazmin Oukhellou, and it was reported in July that she feared that she would not be invited to his funeral after his mum allegedly believed that the pair had a row just before the crash.

According to The Sun, Jake's mum Anita Walsh told Turkish authorities she believed her son and Yazmin, 28, may have had an argument after leaving a nightclub in Bodrum. Yazmin, however, has since shut down those rumours – insisting there was no argument between them. A source told The Sun: “It has become difficult for all involved. Yaz’s biggest fear is being asked not to go to the funeral and not getting to say goodbye to Jake.

“But at the same time she doesn’t want to upset anyone."

The source went on to describe the situation as "horrible" as Jake's family is completely "devastated" by the loss. "His death is still so raw for everyone involved," they shared, adding: “With time it’s hoped they can come together and mourn their loss."