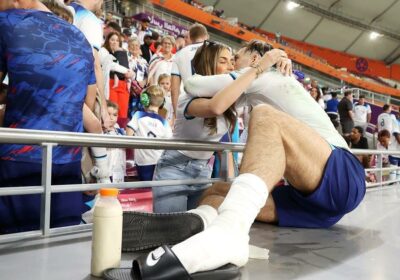 The Manchester City man, 27, came on as a substitute in the second half of England's first group match of the 2022 World Cup match against Iran, with a dazzling 6-2 win.

Jack bagged himself his first ever World Cup goal in the game, which he celebrated with his family and Sasha in the stands after the match's very delayed ending.

The couple met when they were both studying at St Peter's Roman Catholic School as teenagers, and have been together ever since.

Model and influencer Sasha, 26, could be seen watching the match from the stands with Jack's family, including his mum and sister. However, the celebration had a poignant meaning behind it.

Earlier this year, an 11-year-old England fan called Finlay was given the chance to meet Jack, his favourite player, after writing him a letter as part of the Premier League's 'Fan Mail' initiative.

Finlay, who has cerebral palsy like Jack's sister Hollie, received a signed Manchester City shirt from his idol, and was also gifted the chance to choose his next goal celebration.

Despite initially choosing the worm, the two negotiated, with Jack's World Cup wiggle being the celebration they settled on. The celebration went down well with fans, with one writing: "Jack Grealish made a promise to Manchester City fan Finlay that he would do his celebration the next time he scored a goal. He kept his word and did it on the biggest stage… What a guy."

Another added: "Jack Grealish doing his celebration for Finlay was so special man. That’s what the game is about."

Jack has previously spoken out about how much his family inspire him.

Talking to BBC Sport during the Euros last summer, Jack said he "loves his family so much".

“My mum text me straight away after the match. I think she was a bit emotional and stuff." “My little brother passed away when I was young, and my other little sister has cerebral palsy, you know, she’s like my best friend. I speak to her all the time.”

When asked if his little sister is proud of him, Jack replied: “Aw, she is.”

He added: “She’ll live with my mum forever so my mum was always looking after the kids, whereas my dad would take me and my brother to Villa Park on a Saturday.