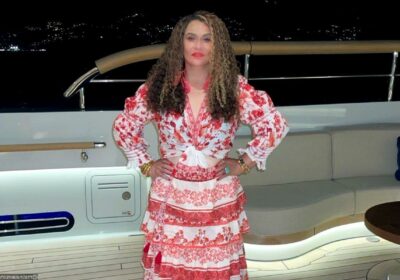 Attorney Laura Hogue, who serves as the defense attorney for Gregory McMichael, was heavily criticized for her depiction of Ahmaud, who was shot by Gregory’s son Travis, during a trial.

“Turning Ahmaud Arbery into a victim after the choices that he made does not reflect the reality of what brought Ahmaud Arbery to Satilla Shores in his khaki shorts, with no socks, to cover his long dirty toenails,” Laura said in her closing arguments. Alongside their friend William Bryan, Gregory and his son Travis chased down Ahmaud in February 2020 before Travis shot Ahmaud to death.

Ahmaud’s mother Wanda Cooper-Jones slammed the attorney for her remarks. “She described Ahmaud as his long legs and his dirty long toenails,” she said. “That was just beyond rude. Regardless of what kind of toe nails he had, what size legs he had, that was still my son. And my son actually was running for his life in that description. I thought that was just, flat out just rude.”

Tina also called out Laura in an Instagram post, calling her “dumb , evil, racist cockroach.” The mother of Beyonce Knowles added in the caption, “the defendants turned Mr Arbery into the victim when they murdered him in cold Blood . This insulting , disrespectful, evil manipulative, racist comment about someone’s loved one who is dead , that she made should get her thrown off this case and charged with reckless behavior.”

“What did the judge do about this disgusting comment? Since when are you breaking the law because you wear khaki shorts and no socks. These people feel so emboldened by the Kyle Rittenhouse case they have no limits to their ugliness,” she went on to rant. “Let’s just blame the victim. Why was she not reprimanded? His mother had to hear her son who has been murdered in the street reduced to dirty Toenails appalling !!!! Do her and the defendants have no soul? !!!!!!”

Many of her followers agreed with Tina’s points. “The crime is being Black!! Period!!! This judge should have thrown her racist behind under the jail!!!!” one wrote in the comment section. “What does his Khaki shorts and socks have to do with anything,” another fan questioned, while someone else asked, “So they killed him because he needed a pedicure? Make it make sense.”