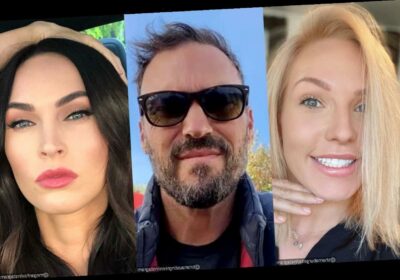 Prior to this, a source hinted that the ‘DWTS’ pro-dancer and the actor are taking their relationship to a more serious level with Sharna meeting his three kids.

AceShowbiz -Having Sharna Burgess in his life may be the best decision for Brian Austin Green. In a new report, a source calls the “Dancing with the Stars” professional dancer “the real deal” for the actor. The source also mentions that Sharna has been helping to “improve his relationship” with his ex Megan Fox, who is currently dating actor/musician Machine Gun Kelly.

“Having Sharna has really enabled Brian to move on from Megan and improve his relationship with Megan even,” the source claims to HollywoodLife.com. “He really hasn’t been this happy in years. Life with Megan was a rollercoaster ride as they would secretly separate and get back together for years.”

Of the “Beverly Hills, 90210” alum, the insider says, “He’s the most easy going, relaxed and nicest guy you’ll ever meet. The other women he spent time with before Sharna were rebounds, but she is the real deal to him.”

Prior to this, a source hinted that Sharna and Brian are taking their relationship to a more serious level with Sharna meeting his three kids, Noah (8), Bodhi (7) and Journey (4). “Sharna has also met Brian’s kids. They’re official and she’s spending a lot of time at his place in Malibu,” said the source.

“They’ve been dating [for] a few months and things are definitely getting serious between them,” the informant added, noting that this is “the happiest [Sharna’s] been in a long time with a man.”

Back in February, Sharna gushed over the actor in an interview on Australia’s “The Morning Show”. “He’s a wonderful dad,” she raved. “He and his wife — uh, ex-wife — have raised three beautiful children. And they are so wonderful and sweet and kind and considerate, and they’ve done such an amazing job.”