With less than a month to go until Election Day, voters are gearing up for what’s predicted to be a very close presidential race. As more people prepare to cast their votes early — in-person or by mail — concerns about voter suppression have amplified due to U.S. Postal System delays during the coronavirus, polling place closures, and long lines. If you think your right to vote is being violated in any way as you try to cast your ballot, here are some voter resources you should keep in mind.

The term voter suppression refers to any strategy which discourages or prevents targeted groups of people from voting in an attempt to influence the outcome of an election. In short, any measure that seeks to make it harder for an eligible voter to cast a ballot can be considered voter suppression. In 2020, this can include purging voter rolls (which often happens without notifying the voter), implementing ID requirements, cutting early voting opportunities, relocating polling places, placing restrictions on student voters, and racial gerrymandering.

The rise in voting by mail may also cause other issues. One of the most recent examples of placing restrictions on what constitutes a valid ballot can be seen in Pennsylvania, where a new court ruling about secrecy envelopes could lead to up to 100,000 mailed-in votes not being counted in the battleground state. As a result of the ruling, “naked ballots,” which are ballots that are submitted without secrecy envelopes, can be thrown out. In 2016, Donald Trump won the state by a margin of only 44,292 votes.

Voter suppression also affects BIPOC people at higher rates, as evidenced by issues with mail-in ballots in 2018. According to an April 2020 study by the University of Florida and Dartmouth College examining the 2018 midterm races in Florida, ballots mailed in by Black residents, Hispanic residents, and other racial minorities were twice as likely to be rejected as ballots cast by white voters. In many cases, officials cited missing or mismatched signatures as reasons to toss out the ballots.

According to U.S. law, every eligible voter has the right to have a say in who represents him or her in the government. Before heading to the polls, know your rights, and make a voting plan following the requirements of your voting district. If there comes a time when you think your voting rights are being violated, there are some steps you can take.

Cast A Provisional Ballot If…

Your right to vote is challenged by a poll watcher or another official.

Federal law prohibits any kind of voter intimidation. However, poll watchers — individuals who’ve been pre-approved to watch the ballot-casting process to guard against any illegal voting — and local law enforcement are allowed to be at polling places, as long as they don’t block pathways or prevent someone from casting a vote. The eligibility to apply to be a poll watcher varies from state to state, although President Donald Trump has encouraged his supporters to turn up to polling places to watch the polls for "cheaters." When early voting began in Fairfax County in Virginia on Sept. 19, voters were forced to walk around a line of Trump supporters.

Poll watchers can review the list of people who are registered to vote, and, in some states, poll watchers are able to challenge a voter’s right to cast a ballot if they think the person is not a U.S. citizen or is living outside the voting precinct. The poll watcher filing the challenge must do so in writing, with a form that contains an oath about their reasons for challenging the person’s right to vote. Once they’ve made the challenge and delivered it to a clerk or voting inspector, the person whose right to vote is being challenged will receive a copy of the oath. If the dispute cannot be resolved right away, you can still cast a provisional ballot, which you can get from your polling place and will be counted once your right to vote has been verified. 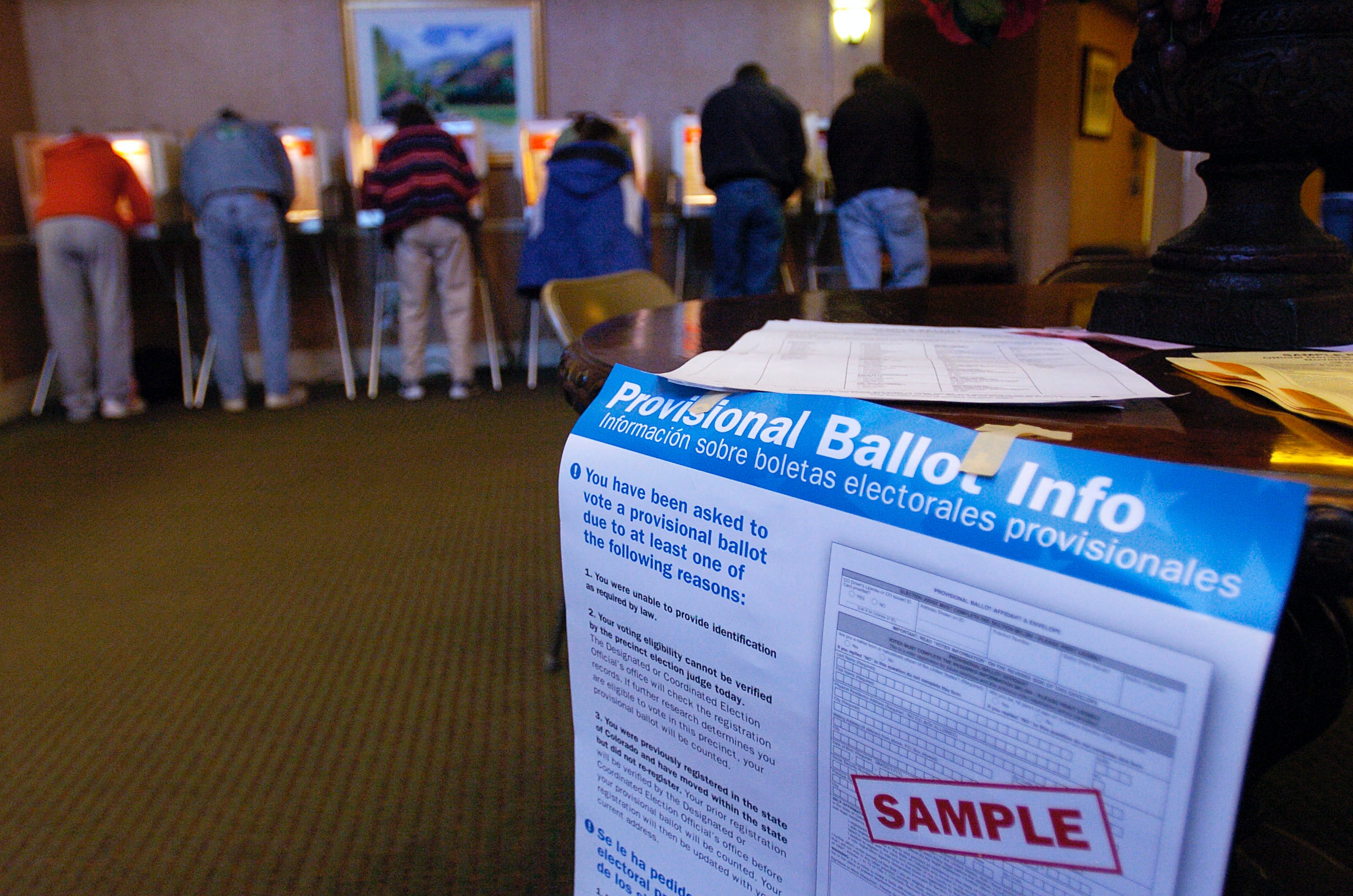 Idaho, Minnesota, and New Hampshire do not offer provisional ballots. However, in all other cases, election officials and poll workers are required by law to tell people they have the right to use a provisional ballot if their right to vote is contested for any reason. They must give the voter the ballot, watch as the voter signs a written affirmation that he or she is a registered voter who is eligible to vote in the election, and then take the ballot for processing. They also must tell the voter how he or she can find out if the ballot was counted, and if not, why it was ultimately rejected.

The poll worker says you’re not on their list.

Even if you’re not in the poll book, which is a record that holds voter register information, you can still fill out a provisional ballot. Once election officials confirm you are eligible to vote, they will need to count your ballot.

Before filling out a provisional ballot, the ACLU recommends you double check the spelling of your name, ask your poll worker if there’s a secondary list of voters, and confirm you’re at the correct polling place by checking their statewide system, or having the poll worker call the main election office. You can also call 1-866-OUR-VOTE yourself to find out the information for yourself.

If you are unable to get to your correct polling place or your name isn’t in any of their records, request a provisional ballot.

The poll worker says your signature does not match their records.

While mail-in voting has seen an increase in popularity due to the pandemic, there are additional concerns election officials will disenfranchise eligible voters due to their signatures not matching up with the version that the board of elections has on file — and not alerting you about it. There are 19 states which will send you a notice and allow you to correct any signature discrepancies on a mail-in ballot. To see if your state offers online tracking for your ballot, you can check here. If you’re not able to correct a perceived mismatch in signatures, request a provisional ballot from your polling place in the meantime.

Call The Election Protection Hotline If…

You are aggressively questioned by someone about your citizenship, qualifications to vote, or are told false requirements to vote.

The ACLU recommends reporting any types of voter intimidation to the Election Protection Hotline at 1-866-OUR-VOTE or 1-888-VE-Y-VOTA (en Español). You can find a full list of hotlines by language here. You can also visit your state’s election office, which will be open on Nov. 3, to report any instances of intimidation or misinformation. If the matter isn’t resolved while you’re at the polling place and you are able to, cast a provisional ballot.

They close your polling place while you’re in line.

If you’re in line to vote when your polling place closes, don’t leave. You still have the right to vote if you were in line before the closing time. If anyone tries to make you leave or tries to keep you from voting, call the Election Protection Hotline at 1-866-OUR-VOTE or submit a complaint to the Department of Justice at 1-800-253-3931. 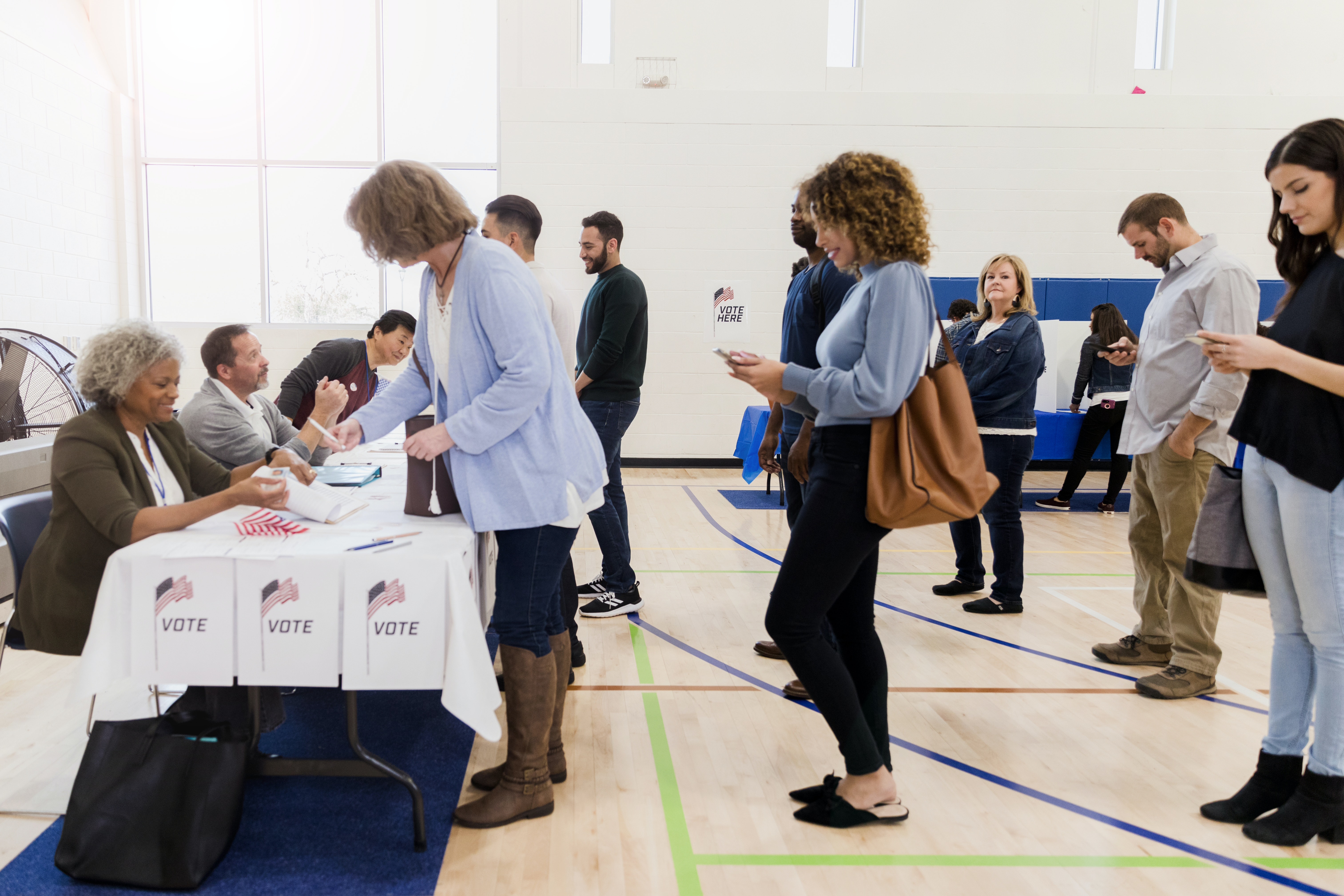 Your closest polling place is not accessible due to disability.

All polling places must be accessible to elderly voters and voters with disabilities. If it isn’t, ask poll workers for curbside assistance and call 1-866-OUR-VOTE to report the accessibility issue. You should also notify poll workers if you have any difficulty using the voting system. (Each polling place must have at least one machine which lets voters with disabilities vote privately and independently).

If you need assistance filling out a ballot, you can bring a friend or family member. Both you and your companion will be required to swear under oath that you asked the person to help you vote and that your companion did not tell you how to vote. If you experience any issues with any of these things, call the Election Protection hotline at 1-866-OUR-VOTE for assistance.

Depending on where you live, you might be able to cast a ballot in a language other than English. Per the federal 1975 amendment to the Voting Rights Act of 1965, certain counties with significant minority populations are required to offer ballots that have been translated into other languages. However, even if you don’t live in one of these areas or don’t speak one of these languages, you still have the right to language help if you’re not comfortable with English. Anyone who doesn’t speak or read English very well can request the help of a friend or family member to assist them with filling out their ballot as long as their helper isn’t their employer or someone who works with them.

If you’re worried about potential voter suppression and long lines at the polls on Nov. 3, a number of states offer early voting and mail-in ballots, which you can send in via the U.S. Postal Service or by dropping it off at your polling place before your state’s deadline. When visiting the polls, make sure to keep in mind the social distancing guidelines from the Centers for Disease Control and Prevention (CDC) as of June 22, which calls for wearing a face mask, keeping at least six feet away from other voters and poll workers when possible, and cleaning your hands before and after you come into contact with any voting equipment. If possible, vote early to avoid peak times where there will be more people.

Your voice matters. So does your vote. Make sure both are heard and counted in the 2020 election by registering to vote right now.

If you think you’re showing symptoms of coronavirus, which include fever, shortness of breath, and cough, call your doctor before going to get tested. If you’re anxious about the virus’s spread in your community, visit the CDC for up-to-date information and resources, or seek out mental health support. You can find all Elite Daily’s coverage of coronavirus here.