Home » Celebrities » The Surprising Connection Between Bridgerton And Brandy’s Cinderella

The Surprising Connection Between Bridgerton And Brandy’s Cinderella 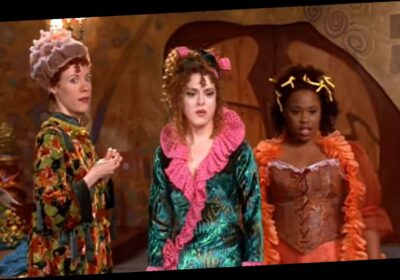 If you’re on your fourth (or 12th!) rewatch of Bridgerton, don’t worry, we won’t judge. The confectionary romance from Shonda Rhimes, creator of Scandal and Grey’s Anatomy, has every reason to be so beloved. It has all the intrigue and societal machinations of a Jane Austen novel with all the petty drama of Love Island. And it doesn’t hurt that since we’ve all been stuck inside for nearly a year with no “social season” to speak of, the scenes of lavish balls and elaborate costumes feel even more fantastical than they already are.

As perfect as a Valentine’s weekend binge would be, you might want to give the luscious Duke of Hastings the night (or at least a few hours) off to check out the newly streamable Rodgers & Hammerstein’s Cinderella from 1997, starring Brandy in the title role and the incomparable Whitney Houston as the gilded fairy godmother as the gilded fairy godmother. It’s just been released today on Disney+ and if the color coordinated dancers puts you in mind of the Bridgerton balls, it’s because you’re watching the earlier work of acclaimed costume designer, Ellen Mirojnick.

Aside from the obvious similarities of the visual opulence and diverse casting choices, the (family-friendly) Brandy Cinderella and the (very steamy) Bridgerton have more in common than one might think — especially if you look for clues to Mirojnick’s artistry in both.

Costumes tell the story in Cinderella and Bridgerton

From the first time we see Daphne Bridgerton, in a white dress complete with satin train, gold embroidery, and gilded tiara, we know she is our heroine. Throughout earlier episodes we see that Daphne’s signature color is the same icy blue worn by Cinderella at her big debut ball. Perhaps Mirojnick chose this color to tell viewers that this is her fairytale?

She certainly uses color to show us who does and does not belong. The noble and respected Bridgerton family are nearly always seen in unifying pastel blues and silver. The more precarious (and status-hungry) Featheringtons however, favor lurid yellow greens that make them appear slightly toxic. Lady Featherington and her unmarriable daughters are more complex and sophisticated incarnations of Cinderella’s evil stepmother and ugly stepsisters, but Mirojnick has used the same exaggerated color palette for both.

And of course, there’s the royalty. Golda Rosheuvel is imperious as Queen Charlotte in Bridgerton, but she shares her fondness for jewel tones, high collars, and complex hairstyles with Whoopi Goldberg as Cinderella‘s Queen Constantina. And Victor Garber’s hot pink brocade suit from Cinderella would’ve looked stunning at Queen Charlotte’s garden party.

As Mirojnick told Vogue, everything on screen in Bridgerton represented a LOT of work, “It took five months to prepare. In the end, there were about 7,500 pieces… that made up the [estimated] 5,000 costumes that went before the camera.” But Mirojnick’s dedication to detail pays off big time in immersive dreamscapes for her productions. You can also see her work in The Greatest Showman (2017), and Maleficent: Mistress of Evil (2019).