Home » The Royalty Family’s Net Worth: Here’s How Much The YouTube Stars Really Make

The Royalty Family’s Net Worth: Here’s How Much The YouTube Stars Really Make 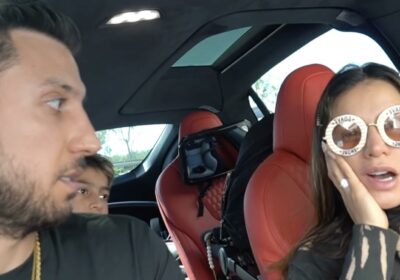 The Royalty Family is a wildly popular YouTube channel with 13 million subscribers. The channel stars Andrea Espada, Ali Saleh, and their children Ferran and Milan. The family started their channel back in 2017 and already has hundreds of videos uploaded.

Their vlogs often consist of challenges such as “Mom and Dad SWAP LIVE’S For 24 Hours! (Bad Idea)” and life updates in videos like “BABY MILAN is Finally CRAWLING!!!! (CAUGHT ON CAMERA).” The family also has various prank videos and even spoke about adopting their son Ferran in a video that gained 5.5 million views as of writing.

Before becoming full-time content creators, Espada worked as a television host for “UFC Now” and actress, while Saleh was looking to “make a difference in the world,” (via Tubefilter). The family only uploaded three videos before their fourth upload, titled “Mom vs Son Challenge!!! LOSER GETS PUNISHED!!” went viral. The family earned $8,000 in their first month as content creators and has watched their net worth increased exponentially over the years.

The Royalty family has over 1.5 billion views on YouTube

According to Nail Buzz, YouTubers get paid $2 to $7 for every 1,000-monetized views after YouTube takes its cut. The Royalty family has already accumulated over 1.5 billion views, as of 2020, meaning they’ve made millions of dollars from their AdSense alone.

They also have done brand deals with companies like Bed Bath & Beyond, Google Pixel, and L’Oréal. In addition to their main YouTube channel, the family also has their second channel Royalty Gaming with boasts 2 million followers and has already racked up tens of millions of views. The Royalty family also earns money from their merch line Royalty Clothing, which sells T-shirts and hoodies.

According to Statsmash, the Royalty family’s net worth is $15 million as of 2021. Considering the family only launched their channel a few years ago, they have the potential to double that number if they continue growing their following and creating viral videos.