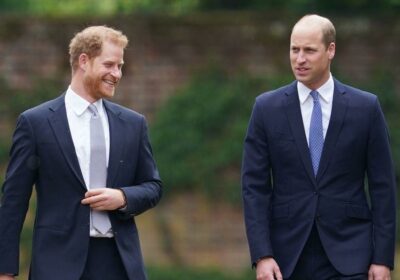 A documentary that has been made by the BBC about Prince William and Prince Harry reportedly made a last minute change in order to appease Prince Harry.

The BBC documentary – titledThe Princes and The Press – has made headlines in recent weeks as it has reportedly angered Prince William and Kate Middleton, who are said to have boycotted the BBC from airing their special Christmas Carol concert.

It's been reported that the Cambridges were unhappy about claims made within the documentary about William and Harry.

However, reports are now suggesting that the channel made last minute changes to the documentary in order to appease William's younger brother, Harry.

Harry – who alongside his wife Meghan Markle, 40, stepped down from being a senior royal and is now living in Los Angeles with their two children, Archie, two, and baby Lilibet.

According to The Telegraph, the channel made the decision to change the word 'Megxit' to 'Sussexit' in the second episode of the programme.

The episode is set to explore claims over behind-the-scenes briefings which have claimed to have taken place, plus claims about lack of support towards the Duke and Duchess of Sussex.

Prince Harry recently stated his objections to the term 'Megxit.'

The 37-year-old said: "Maybe people know this and maybe they don't, but the term Megxit was or is a misogynistic term, and it was created by a troll, amplified by royal correspondents and it grew and grew and grew into mainstream media."

Kate at 40: A Thoroughly Modern Duchess

In this special collector's edition of OK!, we take a look at the Duchess of Cambridge's rise to become one of the most loved and respected members of our Royal family.

Ahead of her milestone birthday, we reveal all about Kate's loving childhood, delve into the secrets of her happy marriage to Prince William and discover what Kate is really like off-duty – from her passion projects to her parenting style.

With the help of royal experts, we celebrate the most iconic moments of Kate's life in the spotlight, and reveal what surprises could be in store as she turns forty in style…

Available in store now and online at www.ok.co.uk/katespecial for only £4.99.

The term is a portmanteau of the words 'Meghan' and 'exit' and has been widely used since the Sussexes made the decision to step back as royals in 2020.

The Cambridges are said to be angry at the network due to The Princes and The Press making ‘overblown and unfounded claims’ about William and Harry.

Expert Angela Mollard told The Morning Show: “It is enormously shortsighted of the BBC. This behaviour is disappointing.”

The Duchess of Sussex's lawyer, Jenny Afia, is set to appear in the second episode of the series, which will cover events from 2018 to now – including bullying accusations levelled towards Meghan Markle.

Addressing claims Meghan bullied two assistants, Jenny Afia says: "Ms Afia said: 'Those stories were false. This narrative that no one can work for the Duchess of Sussex, she was too difficult and demanding as a boss and everyone had to leave, it's just not true."

For more celebrity updates, sign up to our daily OK! newsletter.