The Internet Cannot Handle How Rich Guy Fieri Just Got 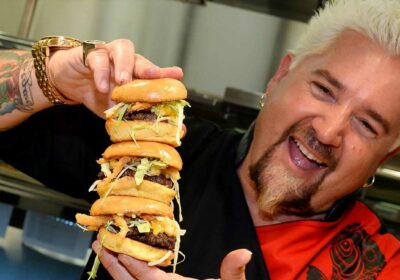 Hello and welcome to Flavortown, population Guy Fieri and the massive pile of cash he just got from Food Network!!!! Turns out Guy, man who knows his way around an unbuttoned flame t-shirt, is sitting on a mountain of sweet, sweet Triple D money (Diners, Drive-Ins, and Dives, duh!), and Food Network is rewarding his efforts by giving him an even fatter contract. And now? Now his net worth is bomb dot com tasty! As Guy would say, so much salami, call my mommy! Holy moly, Stromboli! What a hot frisbee of fun!*

Ahem, anyway, as part of my personal mission to turn Cosmopolitan into a Guy Fieri fan website, we’ll be breaking down every ounce of his ~funkalicious~ net worth for ya:

You read that right: Celebrity Net Worth reports that under his new contract with Food Network, Guy is reportedly making $3,000 per hour, every day, all day, all year. In other words, he just signed a three-year $80 million contract to make amazing content like this!

Guy first arrived on the mean streets of Flavortown as a contestant on the reality show Next Food Network Star in 2006, and was then given a cute lil show called Guy’s Big Bite. His salary for that series? $6k total. In other words, what he currently makes in just two hours. MY, MY, HOW TIMES HAVE CHANGED.

Guy Fieri Is Now the Highest Paid Chef on TV

Thanks to his sweet new contract with the surprisingly rich folks at Food Network, Guy is the highest paid TV chef in the world and, as Celebrity Net Worth notes, one of the highest paid people on TV, just, like, in general. Apparently he’s worth the $$ though, because back in the harrowing days of 2020, Diners, Drive-Ins, and Dives generated over $230 million in ad revenue. Scared. But also inspired!

Guy also has a chain of restaurants, a food delivery business, and a tequila company. TBD on how these ventures impact his overall net worth, but we should probably all buy this—every penny helps!

Guy has raised more than $25 million for food industry workers who were left unemployed during the pandemic, awarding over 43,000 grants of $500 to out-of-work line cooks and servers. Now, he wants to boost the exposure of restaurants by getting back to work. “Nothing can replace what this kind of recognition, appearing on TV, can do for these people and their businesses … for their lives,” he recently told The Hollywood Reporter. “I need to keep doing this because it just needs to be done.”

So, What’s Guy Fieri’s Net Worth?

At the moment? $40 million. But expect this number to rise dramatically—much like the freshly bleached spikes in Guy’s magnificent hair—as he cashes checks from his new contract over the next three years.

Also, if you’re feeling inspired by this moving and funkalicious tale of success and you’re thinking about changing your entire life to mimic that of Guy Fieri, here’s a good place to get started: