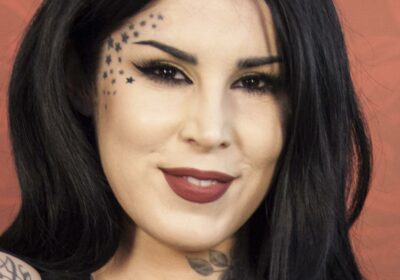 Kat Von D — whose real name is Katherine Von Drachenberg — is known for her eccentric style and numerous tattoos. Her humble beginnings started in Mexico, her place of birth. At the age of 6, she and her family moved to the United States (via Insider).

Kat Von D’s fascination with cosmetics and punk rock music started in her teens, which inspired her to express herself. Many musicians have tattoos, across all genres, and her love of music ignited Kat Von D’s interest in body art. At 14, the entrepreneur started tattooing people, and two years later, she dropped out of school to pursue her passion. At the same time, she got her first job at Sin City Tattoo, a studio in Los Angeles, California. Of course, her parents did not approve of her decision, although they remained supportive.

“I think when I started getting tattoos, it was really scary for them, and you know, I had a Mohawk, and I was 14 when I stopped going to school,” Kat Von D told PR, via Insider. “My dad’s a doctor, and they were missionaries for the church. It was kind of scary for them, but a decade later, and a TV show later — whatever it takes to make them understand where I’m coming from.” Her passion and talent landed her a role on a TV show called Miami Ink in 2005. In 2007, she left the series for her own show called LA Ink, which ran for four seasons.

Kat Von D has a tattoo of her mother, Sylvia Galeano, on her left shoulder. She and her mom have always been close and have attended events together. The LA Ink star took to her Instagram and uploaded a photo of them posing together during the Latina awards, as per the caption.

Kat Von D can be very sentimental. She got a tattoo of Los Angeles — also located on her left shoulder, but more toward the front side of her body. The ink paid tribute to where she got her first job. Despite being born in Mexico and living in Loma Linda, California in her early years, the beauty guru has always adored the City of Angels over other cities.

She has an “LTP” tattoo on three fingers on one of her hands, which means “loyal to profession.” The Finnish Gothic band HIM probably inspired the heartagram tats on her fingers. The symbol combines a heart and a pentagram. Meanwhile, the “TLA” tat (seen via Instagram) on one of her fingers means “true love always.” The artist adores hearts, and she had another one tattooed on her hand by ex-husband Oliver Peck. The spider tattoo on her index finger symbolizes female power, strength, courage, balance, and danger. In addition, Kat Von D’s love for music made her decide to get a tattoo of Ludwig Van Beethoven’s initials and portrait (via Body Art Guru).

Kat Von D had been very much in love with her ex-husband, Oliver Peck. She had tattoos all over her body to showcase her love for the tattoo artist. Kat Von D and Peck married in 2003, but unfortunately, their marriage didn’t last, and they separated in 2007. The 39-year-old model had Peck’s name tattooed on her neck, as well as his portrait on her left leg. She also had inked Peck’s last name on her fingers in tiny letters. It may have been an utterly bad move since the couple split, but Kat Von D did not regard her decisions as a mistake.

“I have lots of people’s names on me, and it’s not so much like, ‘Oh, I’m gonna regret my ex-husband’s name on my neck,'” she told Inked Magazine in an interview in 2008 (via Insider). She also shared that she doesn’t regret anything that has happened in her life — including her failed marriage and most especially, her divorce. Kat Von D also noted that she’ll sport the tattoos forever (via Tat Ring).