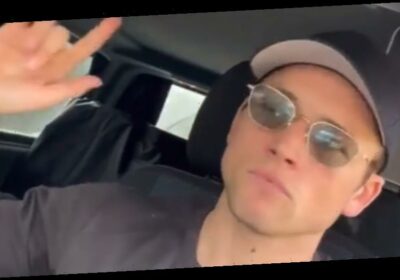 Taron Egerton is showing off his lip-syncing skills!

The 31-year-old Rocketman actor shared the hilarious video to his Instagram stories on Thursday (April 1).

The clip shows Taron dancing to the Nelly Furtado track in his car as he mouths the words to the song.

In the second half of the video, he seems to forget the lyrics and added the caption, “Then this is the bit where I don’t know the words.”

A fan uploaded the clip and wrote, “no thoughts just Taron Egerton dancing to this.”

Taron has been hard at work shooting scenes for his upcoming film Tetris, which follows the creation of the iconic game via computer programmer Alexey Pajitnov, during the fall of the Iron curtain in the USSR.

Taron plays Dutch-born video game entrepreneur Henk Rogers, who secured the global rights to distribute Tetris on video game consoles. Check out the pics of him on set!