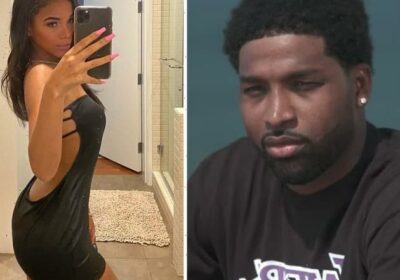 Sydney Chase says she has all the receipts.

The 23-year old model nearly destroyed the entire Internet this week after her appearance on a podcast went viral.

Her appearance on a podcast, we should clarify, that once again implicated Tristan Thompson in a massive cheating scandal.

According to Chase, she met Thompson late last year and was told by the professional basketball player that he was single.

The pair proceeded to hang out and Sydney then beat around nary a bush in saying they slept together, providing alleged details that only someone who had seen Tristan naked would know.

“It was a peek-a-boo d–k but baby it was good,” she said on the aforementioned podcast about, well… pretty obvious what she said this about, isn’t it?

“I did not know he told me he wasn’t in a relationship anymore,” Chase elaborated on the podcast.

“So we talked. We hung out multiple times. We did everything. This was in January or November – probably January. Then we hung out, everything was cool and he was talking to me.

Chase added that the last time she talked to Thompson was right after his daughter’s birthday … which was only two weeks ago!

We’ve now learned, though, that Chase jumped on Instagram Live back on April 8 and seemingly spilled so much damning tea about Thompson and their supposed hook-up.

Donning a pink baseball cap and black crop top after a night of drinking, Sydney Chase appeared to forget that her friend was broadcasting this session live.

“Tristan Thompson just said, ‘Send me a picture of your [inaudible],” she says on this just-resurfaced video.

She continued on the broadcast:

“Tristan literally said, ‘Yes baby I like that. I want to see what they look like. I’m curious. You got me excited to come back.”

To be clear, Chase doesn’t actually show anyone these text messages during this Instagram Live footage.

She simply makes references to them.

Chase eventually notices that her friend, Erika, is recording, realizes that what she is saying is going right out to the Internet and remarks:

She then addresses Thompson himself, shrugs and adds:

“Might as well, at this point, it’s life. I ain’t sign nothing, you did what you did that’s on you. Tristan banged me. I did not bang him.”

We’re not sure exactly what that means.

Thompson, however, has certainly become known as a banger. And we’re not just talking about his penchant on an NBA court for inviting contact in the paint.

He admittedly cheated on Khloe when she was very pregnant with their daughter.

And he did so for a second time (with a good friend of his girlfriend’s, no less) after she found the capacity and grace to take him back.

Thompson has also been accused of leaving his first baby mama, Jordan Craig, for Khloe.

“Apparently Khloe is not his type but I’m his type and [inaudible.],” Chase said on Instagram Live, evidently citing Craig and explaining:

“He wanted the status and be able to keep that status but I looked just like his ex and am his type.”

She then brought Khloe back up at the end and alleged that the reality star simply can’t be ignorant of her man’s wandering and often-erect penis.

“There’s no way she doesn’t know,” Sydney said of Kardashian.

After her podcast bombshell went viral, Chase recorded a TikTok video and didn’t really backtrack from any of her claims.

“In this interview, I was asked a question by my friend Hayden which I answered honestly,” she said.

“However, I did disclose personal information about Tristan which I do apologize for because that’s not okay and I shouldn’t have done that.

“However, me answering the question about our past relations, that is true.”

The Good American founder shared a message on Tuesday evening about having a bad day after these new cheating allegations came to light.

She posted a quote on social media that reads as follows:

“People who don’t hesitate to share a kind word or do a good deed to brighten someone else’s day are the best kind of people.”