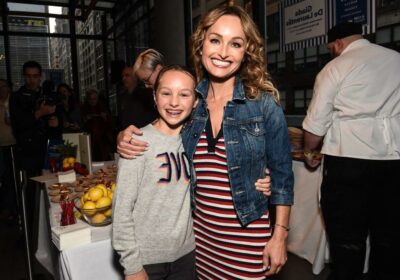 Breakfast for dinner is a thing, from pancakes and waffles to omelettes and bagels. But dinner for breakfast? Food Network chef Giada De Laurentiis says why not, particularly if that breakfast boasts a healthy dose of pasta in a starring role.

Treat that special someone for Mother’s Day to this bright and sunny Egg and Pasta Scramble with this recipe, courtesy of the Giada at Home host.

De Laurentiis will most likely have some kind of meal or treat made by her daughter Jade for Mother’s Day this year. Named after her mom (Giada is jade in Italian), Jade became a teenager this year.

As chronicled by her mom’s social media accounts, the younger De Laurentiis and her mom bake, cook, travel, and generally have a lot of fun together.

“I bought Jade a little purple ceramic knife and she just loves it,” De Laurentiis said. “She’s like ‘What can I chop? What can I cut?’ It makes her excited about what she’s going to make, and then she’s more apt to actually try new things and eat her dinner.”

When her daughter was much younger, she told Parade, “I know I’m her mother, but she’s become my best friend. We have so much fun together. I never realized I could have so much fun with a 5 year old! I didn’t think it was possible, but we laugh so much, and she’s so inquisitive.

“I thought maybe she wouldn’t want to cook like me because she’d want to do her own thing, but she’s so into what I do and wants to be by my side every day.”

Prepare the orzo following the instructions on the package. In a bowl, combine the eggs, salt, and pepper. Blend in the cheese and basil and set the mixture aside.

Place the butter in a pan over low to medium heat. Add the pancetta, cooking it until it’s crisp. The onion can now be added followed by the asparagus.

At this point, the cooked orzo can be added and stirred in, followed by the egg mixture. De Laurentiis recommends scrambling the eggs with a rubber spatula until the eggs are cooked to the preferred “doneness.”

While you’re prepping this recipe, keep in mind these tips for a great dish.

The Giada at Home host says to keep in mind that the eggs are best used at room-temperature. Using them straight from the fridge causes them to seize up.

De Laurentiis also suggests cooking the pancetta first. Why? Because, once the cured meat has been sauteed, you’ll be cooking the onion in its delicious drippings, which will infuse the onions with smoky flavor.