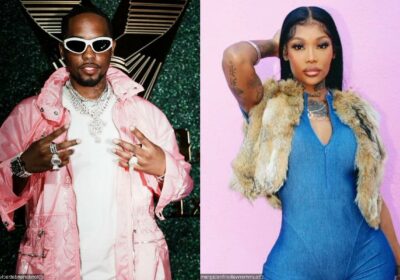 The ‘Ex for a Reason’ singer, who split from London for good in mid-2021, takes to her Instagram account to blast the music producer, with whom she shares a daughter.

AceShowbiz –Summer Walker‘s relationship with ex London On Da Track is seemingly beyond repair. On Friday, June 3, the “Ex for a Reason” singer took to her Instagram account to blast the music producer, with whom she shares a daughter, by calling him the “worst [baby daddy] on the face of the planet.”

In the now-deleted post, the “Girls Need Love” hitmaker wrote, “I literally have the worst [baby daddy] on the face of the planet lol.” She went on to say, “I can’t wait till I can just get some peace.”

Despite the stress, Summer shared that she found strength from her baby, Princess Bubblegum. “It’s okay I tho I have the most perfect bundle of joy in the world, wouldn’t change anything about my past if I could,” she gushed.

The singer also reposted some supportive messages that she got from her fans. “As long as you know [you’re] doing your part that’s all that matters,” one user wrote to her. “Everything is full circle and one day they’ll feel bad about their actions, but by then it’ll be too late. Just live your truth.”

Someone else joked, “Nahh sis I doubt he’s the worst. I think mine got yours beat!” Summer’s post also prompted another fan to open up to her about similar problem. “Tell me about it. Mine asked me to pay him child support because he OFFERED to get them a few extra days during the week. If you ain’t got no job just say that,” the user shared.

Following her split from London, Summer never shied away from putting him on blast. Most recently, the R&B singer, who is now dating LVRD Pharoh, revealed that she threw a Mother’s Day gift from her ex in the trash. At the time, Summer responded to fan who asked if she also got a bouquet of flowers from London like his other baby mamas. “Did Summer get a flower too?” the fan asked, to which the musician replied, “Same ones & left them s**ts by the dumpster where they belong.”