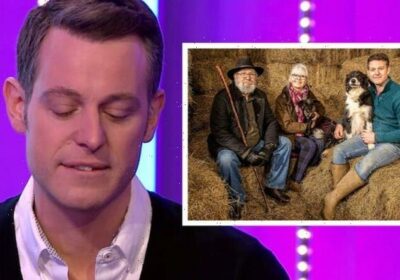 Matt Baker, 44, left fans shocked when he decided to quit The One Show after nine years on the BBC sofa. But he had no idea just how well things would fall into place for him, until the pandemic hit last spring.

You suddenly realise what makes you

The presenter has his eggs in many different baskets, what with his regular slot on Countryfile still at the forefront of his career.

He has always enjoyed the outdoors lifestyle and being the son of a farmer, it seemed only natural.

Which is why he decided to move his family – wife Nicola and children Luke and Molly – back to the Durham Dales after his mum Janice, had a nasty accident on their 100-acre farm back in July 2020.

Janice and Matt’s dad Michael, couldn’t run it alone and after being left with a fractured tibia when she was knocked over by some large sheep, it was near enough impossible to keep things running smoothly.

Never one to pass up an opportunity, Matt soon secured a commission and the Channel 4 documentary series Our Farm In The Dales, was born.

He had many reasons for leaving The One Show, with one of them being to spend more time with his family, and he definitely got what he wanted.

Of his exit, he told The Yorkshire Post last year: “When you get to a certain point in your life you start reflecting.

“I’d had that period in my life when I was so busy with The One Show – which was fantastic – but then you suddenly realise what makes you.

“The countryside has made me who I am.”

He laughed: “There’s only ever been six months in my life when I haven’t had a flock of sheep.

“That’s what’s really important to me. Life could carry on.”

And with running the family’s farm while filming a new series, he was on top of the world.

“I directed and produced the documentary and used all my friends to make it,” he said.

“It was a joy. We sat round and had a big old family meeting about it and mum and dad said, ‘Let’s go for it’.

“I said, ‘Whatever we film we will put together, will show you what it looks like and if there’s anything in it you don’t like it won’t be shown’.

“They effectively became the executive producers and it was like a home video of what we are doing. It was a very natural process.”