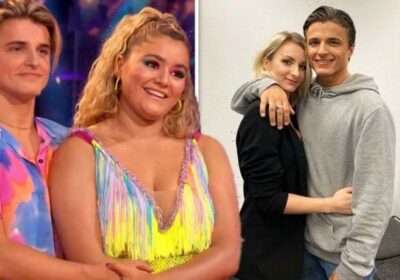 Strictly pro Nikita Kuzmin, 23, has not been to see his girlfriend of five-years, Nicole Wirt, since he and Tilly Ramsay, 20, were voted off the show, according to reports.

Nicole, who is also a professional dancer, is currently in her native Germany and was reportedly hoping Nikita would fly over once his Strictly stint had ended.

However, despite being eliminated two weekends ago, it is understood Nikita still hasn’t made the trip.

Insiders have put Nikita’s absence down to new Covid travel rules, which he would have to follow when leaving and entering the UK.

As a result, Nikita may not be available to rehearse the group numbers for the Strictly Christmas special, which is yet to be filmed.

A source claimed to The Sun: “It’s raised a few eyebrows, not least Nicole’s.

“She hoped that as soon as Nikita was done with the competition he would be on the first flight to Germany to see her.

“But the new Covid variant, and rules about going in and out of the country and testing, mean he would miss rehearsal time so he has had to shelve any plans for now.”

Tilly and Nikita were voted off in week 10 of the competition after her Samba saw her in the dreaded dance-off against Rhys Stephenson and Nancy Xu.

Nikita has previously spoken about his close friendship with Gordon Ramsay’s daughter and says that they “go so well together”.

Speaking to the Metro, he said: “Tilly and me – I don’t know how Strictly managed to make such a perfect partnership because we are just like two best friends having to dance together.

“I trust Tilly that she’s going to be amazing and Tilly trusts me completely [with] whatever I say, whatever I’m trying to teach her.

“It’s all about trust – trust and friendship.”

Since the couple’s exit from the show, a relationship expert analysed their body language and said it was clear how much they mean to each other.

Match’s Hayley Quinn told Express.co.uk: “After being eliminated, the two shared an intense hug, showing how much they truly mean to each other and the strong connection they formed.

“As they waved to the crowd and said goodbye to the hopes of becoming 2021’s winners, they looked at each other deeply with adoration, signifying that they will stay connected.”

“After dancing the sexy Samba, Tilly held her hands self-consciously across her body, seeming much more preoccupied with how her dance moves were going to be received, rather than any potential romance.