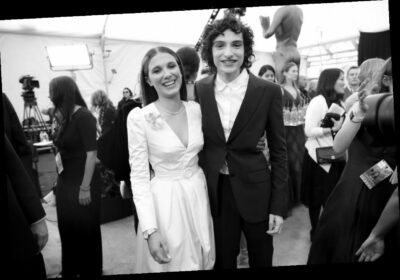 While plenty of Stranger Things fans ship Mike and Eleven, some people believe that the actors who portray the characters should be dating as well. One of those people, as it seems, is Noah Schnapp, who plays Will Byers on the series. According to a hilarious Instagram tag, he appears to think that Millie Bobby Brown and Finn Wolfhard secretly have the hots for each other. Keep reading to find out why.

Are Millie Bobby Brown and Finn Wolfhard from ‘Stranger Things’ dating anyone?

While their characters on the Duffer Brothers’ series seem madly in love with each other, Brown and Wolfhard are just friends as of 2021. Brown was in a relationship with Joseph Robinson for 8 months before deciding to call it quits in August of 2020. According to The Sun, both are at the height of their careers, and they grew apart.

“Millie has become a huge star overnight, and Joseph’s rugby career is really on the rise, so perhaps it just wasn’t the time for them to have a romance,” a source told The Sun. “Of course, they’re both still very young, so no doubt there’s lots ahead for both of them.”

And as for Wolfhard, he seems to be focusing on his career rather than a relationship. In 2016, he tweeted, “I do not have a girlfriend! I’m only a baby boy!”
The actor later joked that he’s actually dating Pennywise from IT, of which he stars in as Richie Tozier.

So as of January in 2021, it looks like both Brown and Wolfhard are single! Perhaps this means there is potential for a relationship between the two brewing on the horizon? Schnapp seems to think something might be up between them.

Schnapp seems to think that Brown and Wolfhard are attracted to one another but are unwilling to confess these feelings. According to Insider, the actor decided to make things awkward for the entire Stranger Things friend group by tagging his pals in a hilarious meme.

It said: “Tag two people that want to hook up with each other to make things awkward with no further comment.”

Of course, Schnapp decided to brew up some lighthearted drama by tagging Wolfhard and Brown. And while Wolfhard and Brown haven’t responded to the post (at least not publicly), this incident will probably make for some interesting dynamics behind the scenes of Stranger Things season 4.

Are any of the cast members on ‘Stranger Things’ actually dating in real life?

While Brown and Wolfhard aren’t a couple (yet,) it looks like there’s a fair amount of romance behind the scenes of the sci-fi series. One great example is Charlie Heaton and Natalie Dyer, who play Jonathan and Nancy on the series. The two are officially dating and have been since season 2 of the series.

It doesn’t get much cuter than that!