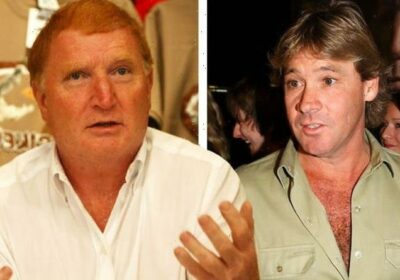 It may have been 15 years since the world lost legendary Australian zookeeper Steve Irwin, but his name and legacy will live on forever. Following that fateful day that sent millions of fans across the globe into months of mourning, his best friend and colleague John Stainton, has revealed he gave an “eerie” final speech to the crew of one of his TV shows.

Irwin, who was widely known as The Crocodile Hunter, died in September 2006.

He was just 44 years old when he was pierced in the chest by a stingray barb while filming a wildlife documentary, Ocean’s Deadliest in Queensland.

But just weeks before the tragedy unfolded, he gave “very weird” speech to his colleagues that has haunted his best friend for 15 years.

Stainton was a producer of The Crocodile Hunter TV series, and was also part of the production team who witnessed Irwin’s horrific death.

In a recent interview on the I’ve Got News for You podcast, the producer opened up on what he describes as the wildlife enthusiast’s “farewell” speech.

“A couple of days before we started the show, he made a little speech to all the crew that were up there catching crocs for his research trip,” he explained.

“Which I joined at the end with our crew to do the [Ocean’s Deadliest] movie.

“And it was really weird.

“He was sort of thanking them all for being who they were and for helping him.”

Stainton went on to add: “It was like a ‘finale’ speech. Very weird.”

Looking back, he also admitted: “I had this idea on arriving that something was wrong.

“But it’s just life, you never know what things are going to do to you.”

Later on in the podcast, Stainton remembered feeling “uncomfortable” about the underwater documentary project from the beginning, as he had a deep sense of foreboding that he was going to die.

He revealed he tried to have the show cancelled canned before the crew travelled to Australia’s northeast coast, but was unsuccessful.

Instead, he underwent a series of medical tests and prepared a will.

Stainton said that Discovery Channel couldn’t call off the documentary because “everyone had been paid”, despite his concerns.

“I felt uncomfortable about it when we were sort of going into the production. In fact, three weeks before we were lined up to shoot I actually rang Discovery and said ‘Look at I don’t feel good about this thing’,” he told host Andrew Bucklow.

“I just had this premonition in January that would be the last day of my life this year. I just had this really weird feeling… So much so that I went and got tests and CAT scans. I thought, ‘I have to have something wrong with me’ (but) nothing came back.

“I even made a will that year in June before we went on the trip,” he added.