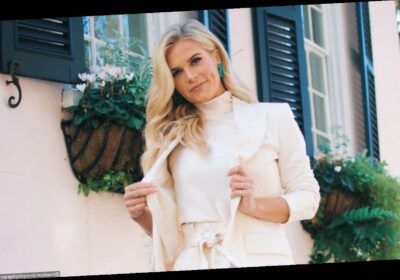 The allegation is brought up by her co-star Craig Conover, who calls Madison a ‘f**king homewrecker’ for cheating on her then-boyfriend Austen Kroll with a married man.

AceShowbiz –Madison LeCroy continues making headlines with her relationship drama. After rumored having a flirty romance with Kristin Cavallari‘s ex Jay Cutler, the “Southern Charm” star has been accused of being a homewrecker.

Bringing up the allegation against the reality TV star is none other than her own co-star Craig Conover. In a preview for the season 7 reunion of the show which was released via ET Online, Craig blasts Madison while defending his best friend and Madison’s former boyfriend Austen Kroll.

According to the site, just 20 minutes into the taping which took place in New York City late last year, Craig attacked Madison, alleging that she cheated on her then-boyfriend Austen with a married man while the pair were taking time apart to figure out their relationship.

“You were flying around the country sleeping with men, married men!” Craig blurts out in the sneak-peek video. “Ex-MLB players. That’s what you were doing during quarantine. You know why Austen was at my house? ‘Cause you weren’t talking to him! You flew to Miami to f**k an ex-MLB player.”

Austen backs up his pal’s claim, saying, “That’s the goddamn truth.” Madison denies it as she challenges, “Put me on a lie detector test. I never flew to Miami. Wheres the record of that?”

Craig and Austen insist that they have the receipt, which is Madison’s Instagram messages with the former MLB player that she allegedly proudly showed off before. Craig goes on blasting Madison, calling her a “f**king homewrecker” and telling the group, “She’s a trash and I hate being on the same stage as her.”

The name of the the former MLB player that was allegedly involved with Madison is bleeped out in the preview, though host and baseball fan Andy Cohen describes him as “a very famous, married ex-MLB player.”

The allegation comes after Madison shared alleged text messages between her and Jay, claiming that he pursued her before the former NFL star sparked reconciliation rumors with his estranged wife Kristin. “You reached out to me… Your intentions may have not been pure but that might be you projecting. I’ve never said anything about Kristin nor would I,” she wrote in the text, saying that she’s “disgusted by this whole situation.”

“I came into this honestly with good intentions. I want no part of being involved in a payback or drama. But you initiated and pursued. If you weren’t interested in something real you shouldn’t have [redacted] with me,” she added. The 36-year-old also revealed that she intended to keep “my mouth shut until I get called a liar.”