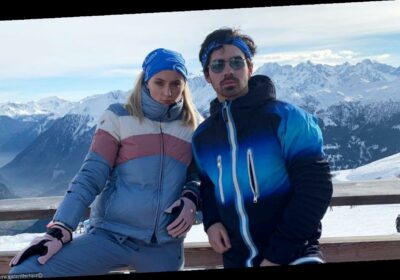 The ‘Game of Thrones’ alum is totally supportive of her husband after the Jonas Brothers star posts on his Instagram Story a mirror selfie that shows his bare abs.

AceShowbiz –Sophie Turner had a perfect reaction to Joe Jonas‘ thirst trap selfie. Shortly after her singer husband posted a mirror selfie on social media in which he showed off his bare abs, the Sansa Stark depicter on “Game of Thrones” dubbed him a “bad dad.”

The 25-year-old English native reposted the one-third of Jonas Brothers‘ picture on her Instagram Story. Alongside the Saturday, March 20 snap, she gave away a GIF that read “bad dad” in big letters. She also wrote, “1-800-DIAL-A-DADDY,” and tagged him.

Sophie’s post came nearly a month after Joe celebrated her birthday with a hilarious tribute he shared via Instagram. On February 21, he put out two images of the “Dark Phoenix” actress that presented two different sides of her. The first shot saw her striking a fierce pose in an elegant look while the second one displayed her wrapping her head in a blue hoodie while making a silly pose.

In the accompaniment of the post, the older brother of Nick Jonas raved, “Happy Birthday babe.” He further noted, “You have two moods and I love them both equally [heart emoji] love you @sophiet.”

The couple, who began dating in 2016, got engaged the following year. The two of them tied the knot in an impromptu wedding at A Little White Wedding Chapel in Las Vegas, Nevada in May 2019. They had their second and bigger ceremony in Paris, France in June that same year.

Joe and Sophie welcomed their first child together, a daughter named Willa Jonas, in July 2020. Four months after the baby’s arrival, they were said to have talked about having another child. “Joe and Sophie are already trying to have another baby,” a source told Us Weekly. “They are really excited to expand their family. Having the baby has made them really close and want to have a large family together.”