So, Now Everyone Thinks Jacob Elordi and Olivia Jade Giannulli Are Dating

Today in news few people saw coming, Jacob Elordi was spotted grabbing coffee with Olivia Jade Giannulli, and now they’re the subject of inevitable dating speculation. The pair were photographed together in Los Angeles over the weekend in pics published by the Daily Mail, and the vibe was pretty casual—with Jacob wearing jeans and a hoodie, and Olivia wearing sweats and slippers. Also, they were with friends, so please be advised that this could be fully platonic.

Obviously, neither Jacob or Olivia have confirmed whether or not they’re a new couple, but outing comes just one month after Jacob’s split from Kaia Gerber. Page Six broke the news, saying the separation was “amicable,” though it should be noted that Kaia’s removed every single one of her Jacob photos from Instagram. Meanwhile, Jacob opened up about Kaia to Men’s Health in an interview that took place pre-breakup, saying “She handles herself wonderfully publicly. [She taught me] how to deal with it and just kind of be whatever about it, you know?” 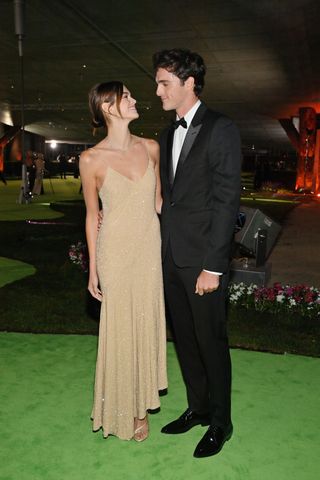 And reminder that Kaia opened up about her ex in Vogue back in May, saying, “Being able to be with someone I trust, where we don’t want anything from each other, having a safe, steady relationship like that, has really opened my eyes to the possibilities of love and what it feels like to love without conditions. Lust is touching other people or wanting them, but love is really seeing someone.”

Oh, and Olivia recently broke up with her boyfriend Jackson Guthy, confirming in August that she’s single when asked by a follower during a Q&A. That’s all!