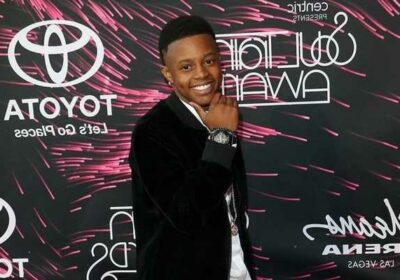 The ‘Watch Me (Whip/Nae Nae)’ hitmaker has been officially charged following arrest in the fatal shooting of his cousin Frederick Rooks in January this year.

AceShowbiz -Rapper Silento has been indicted in the shooting death of his cousin.

According to new legal documents, obtained by TMZ, the “Watch Me (Whip/Nae Nae)” hitmaker has been hit with four felony charges, including one count of malice murder and one count of felony murder.

He was also charged with aggravated assault and gun possession during the commission of a felony.

Silento was arrested back in February (21) for allegedly murdering Frederick Rooks during a street altercation on 21 January in Georgia.

He is being held without bond.

In June, a judge denied the rapper’s $25,000 bond request, citing his mental health issues and history of not taking his prescribed medication. The judge further noted that the rapper once left a mental health facility in California.

Silento’s grandparents were also reportedly against the idea of the rapper being granted release on a bond.

His PR manager confirmed his battle with mental health issues, “Over the past several years, Ricky has been suffering immensely from a series of mental health illnesses. We will continue in his efforts of treatment, but we ask in the meantime the public uplift him and his family in immediate prayer & positive energy!!”

“Ricky is a beautiful soul, and we hope that the same people who came up whippin’ & nay nay-ing with him, continue to support him and lifted in paryer!! God bless.”