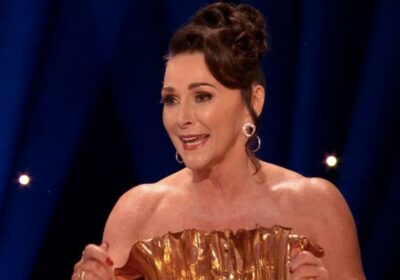 Shirley Ballas reveals her proudest achievement of the year

Shirley Ballas has admitted she feels like she is “wearing a mask” as she claimed she doesn’t know what being “happy” means, in a candid interview this week. The 62-year-old may seem in high spirits on Strictly Come Dancing, but revealed she suffers from anxiety and worrying thoughts behind closed doors.

The professional dancer candidly said: “I have dark moments. If someone asks, ‘What’s happy?’ It’s like, ‘I have no idea. You tell me’. I feel like I’m wearing a mask.

“When I go to do Strictly, people expect me to be ‘on’ but behind closed doors I’m tussling with myself, asking myself, ‘Why do I feel like this? Why am I emotional? Why do I look at myself and not see beauty?'”

Shirley believes she will always be the same as “it’s been engrained from being a small child”.

The head judge went on to say she suffers from heart palpitations and can’t sleep when she is feeling anxious, particularly when it concerns her mum’s health.

She told Top Santé Magazine: “Lately, if I hear music that my mother likes, I think about the fact she’s getting older and I envisage things that haven’t happened yet, rather than staying present in the now.

“In that way, my anxiety is self-inflicted. Breathing and talking positively to myself helps it subside.”

Since signing up as head judge on the BBC show, she has been subject to online abuse due to her decision making.

The professional dancer has the final say on which celebrity leaves the competition in the event of a tie between her fellow judges.

Criticism aimed at Shirley isn’t just based on her opinions on the contestants however, as the judge revealed comments have been personal at times.

Speaking to The Mirror, she said: “It makes you worry – ‘Do I look right? Am I too heavy?’

“They say, ‘Cover up your bingo arms’, then it makes you think, ‘Should I wear a dress with sleeves?’

“One person said, ‘Your ears are too big’, so I got a tape measure out and measured my ears.”

Shirley’s partner Danny Taylor and her fellow judge Craig Revel Horwood have urged her to ignore the comments, but she admits it’s not that easy.

“You just want to do the best job for the people watching.

“And when it’s not reciprocated and they say I didn’t agree with your mark, you sent the wrong person home, I’m fine with that.

“But when it gets personal then I think that’s cruel.”

Once Strictly concludes this year, Shirley will be taking some time out and will skip her usual pantomime stint.

She said she will use the time to “collect herself” and “see what I want to do with myself next year”.

Strictly Come Dancing continues Saturday at 7:15pm on BBC One.