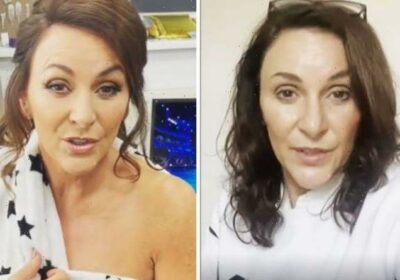 Strictly Come Dancing’s head judge Shirley Ballas has taken to Instagram to issue an update on her health after she was inundated with “alarming” messages from viewers who claimed to have spotted a lump while she judged on the dance show. After having visited medical professionals earlier today, Shirley revealed that she is set to undergo more health tests after she found out that her hormone levels are “all over the place”.

So maybe it was cameras, lighting – not sure

In a new clip, Strictly’s head judge reassured her 194,000 followers that she was getting herself checked out.

She said: “Hi everyone, I just wanted to say I popped to the doctor this morning.

“She did an underarm test and a breast test, she couldn’t feel anything, although she also thought that she saw something when I lifted my arm up.”

“So maybe it was cameras, lighting – not sure,” Shirley added.

She went on to say that despite the breast and underarm tests coming up clear, it was discovered that her hormone levels weren’t as they should be.

“What we did discover is that my hormone levels are all over the place, so again, to the ladies out there, it’s always worth checking.

“Apparently my testosterone is that of a man and my oestradiol is zero!” Shirley added.

The star went on to reveal that she’s undergoing more tests later in the week, before the next live show.

Shirley continued: “So, we will be going to the hospital on Friday morning.

The dance professional went on to reassure her followers over her upcoming appointment, before thanking her fans for their support.

“This is not to alarm anybody, but I’ll be having a little bit of an overhaul, as they say,” Shirley said.

“But to all the kind ladies who reached out to me and sent me those messages out of concern and love from their heart – I do love you, I love all my fans dearly and you’re super, super sweet, thank you.

“And to all the women out there, get checked and keep checking yourself. It’s important, don’t put anything off,” Shirley added before signing off.

Taking to Instagram ahead of Saturday’s show, Shirley revealed that she’d received messages two weeks in a row from concerned fans who thought they had spotted a lump under her arm.

After performing a self-check, the head judge said she could feel “a tiny little node at the back”.

Back in June, Shirley said she was “going backwards and forwards” to the hospital after discovering a lump in her shoulder, which medical professionals believed to be a “ganglion cyst or tumour”.

Speaking about it on GB News, Shirley told how she believed she would be fine.

The mother-of-one has had two other cancer scares in the past, with the disease sadly running in her family.

Strictly Come Dancing continues on Saturday at 7.05pm on BBC One.