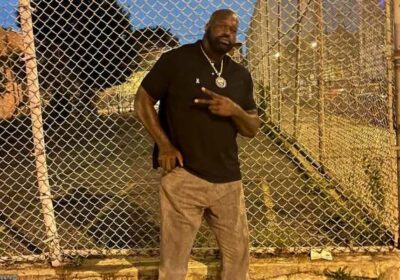 It is unveiled that the former basketball player, who pays more than $25,000 in checks for the diners at Jue Lan Clubs, also leaves the restaurant’s staff ‘the biggest tip they’ve ever received.’

AceShowbiz –Shaquille O’Neal is feeling a little extra generous after going on a date with a mystery woman. The former basketball player reportedly paid bills for all visitors at Jue Lan Club after he enjoyed his meal with the unnamed woman.

According to Page Six, Shaq and his date arrived at the Chelsea hotspot at around 8:30 P.M. on Sunday, June 12. He reportedly ordered Beijing chicken, shrimp tempura and the eatery’s signature chicken satay. An insider told the outlet, “She did all the ordering.”

The source added, “And to top that off, he paid for everyone’s check [who was] dining at the restaurant.” The 50-year-old, however, wanted to keep his good deed a secret from fellow visitors as he told the staff not to mention he was paying the bill for more than 40 tables until he left the spot.

In addition to paying “over $25,000” in checks for the diners, Shaq also tipped the restaurant’s staff. “He left them the biggest tip they’ve ever received,” the informant divulged.

Shaq was previously married to Shaunie O’Neal from 2002 to 2011. In April this year, he admitted that it’s all his fault they’re no longer together. When appearing on “The Pivot Podcast”, he shared, “I’ve never talked about this, and I’m glad you guys asked because I don’t mind talking about this, but I was bad… She was awesome. She really was. It was all me.”

However, Shaq didn’t explain further “what he was doing.” He just explained, “I wasn’t protecting her and protecting those vows… Sometimes when you live that double life, you get caught up. I’m not going to say it was her; it was all me.”

Shaq also acknowledged that Shaunie, who is now married to pastor Keion Henderson, has done her best to save their marriage. “She did exactly what she was supposed to do and gave me beautiful kids, take care of the house, take care of the corporate stuff. It was just all me. Sometimes, when you make a lot of mistakes like that, you can’t really come back from that… She was awesome, she really was. It was all me,” he stated.