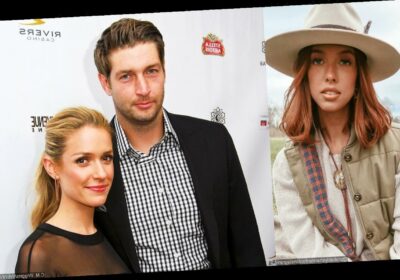 The ‘Very Cavallari’ alum insists that her lunch meeting with the former NFL player was far from being ‘spicy,’ and explains why she is saddened by her former employer’s separation from her husband.

AceShowbiz –Shannon Ford has broken her silence about her hanging out with Jay Cutler amid his divorce from Kristin Cavallari. More than a month after she was seen enjoying lunch with her former boss’ estranged husband, the “Very Cavallari” alum finally spilled on the story behind the November outing.

The 27-year-old shared her side of the story in the Tuesday, January 5 episode of “Not Skinny But Not Fat”. She began, “I was home in South Carolina for Thanksgiving, and I saw that Mark [Block] was in Charleston. And I was like, shut the f**k up…What are the odds? And then I went back to his social media and I was like, what bar is he at? And he posted another story and he was with Jay, and I was like, ‘Oh no.’ “

Shannon thought that Jay “hated” her because they had never spoken since she was fired by Kristin from her jewelry company, Uncommon James. However, their mutual pal Mark insisted that she joined the two of them. “Mark was like, ‘No, come join us. Like, [Jay] already knows you’re here. It’s fine,’ ” she recalled.

“People don’t realize this, I was with my mom and my grandma. That video didn’t show my mom and my grandma were there. That’s how not spicy it was,” she revealed to host Amanda Hirsch. She also insisted that she did not “know the reasons” why the former quarterback posted the clip on social media.

“I didn’t post it. I didn’t look thirsty. When I got there, I put my phone very far away because I thought they might think like, ‘Oh, Shannon will love this. She’ll love nothing more than attention and I wanted to be, like, the cool girl that genuinely was enjoying a drink with her friend and Jay,’ ” she continued. “So I was like, I’m not going to make this weird at all.”

Despite the outing, Shannon claimed to be saddened by Jay and Kristin’s split. “I was very close to Jay and Kristin outside of working,” she said of the former couple. Describing the pair as “good parents,” she added, “I don’t know anything about, like, them together, but I only just viewed them as parents.”

“There are three small children who have parents that are divorcing and that’s sad. I just genuinely mean that. That was, like, actually my thoughts on it. I’m sad,” she continued. “Not sad if they don’t want to be together, then I’m happy that they’re figuring that out separately. But I’m sad that it’s very public and that they have children.”

Shannon’s clarification came after Jay posted an Instagram video of them spending time together with Mark in late November. “Oysters and wine @theblockagency @probablyshannonford @167_raw,” the NFL star captioned his post.