Scottie Pippen took to Instagram to reveal the tragic news that his eldest son, Antron, passed away at the age of 33. Read his emotional message.

Scottie Pippen shared an heartbreaking message on April 19, revealing that his 33-year-old son, Antron Pippen, had tragically passed away on April 18. The former NBA star, 55, shared a series of photos of his son, dating back from the time he was little to recent snapshots of the young man, which you can see here. His message, however, revealed the deep pain and struggle he was enduring. 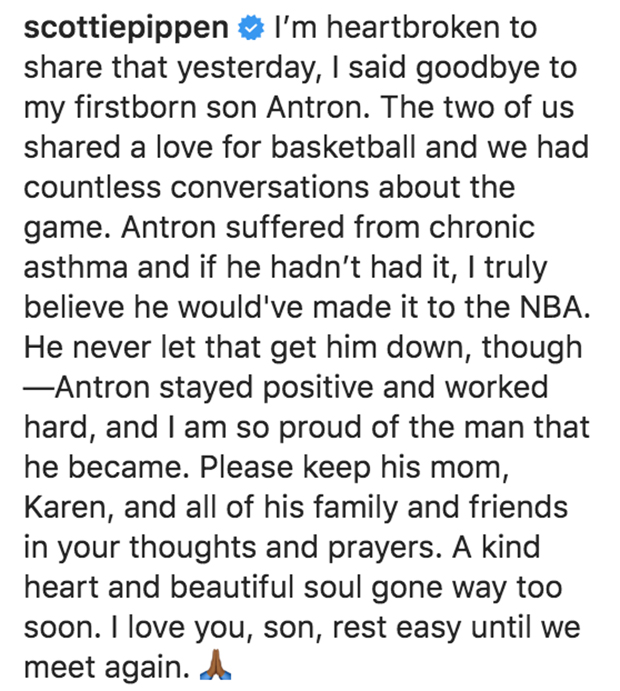 “I’m heartbroken to share that yesterday, I said goodbye to my firstborn son Antron,” the caption to his post began. “The two of us shared a love for basketball and we had countless conversations about the game. Antron suffered from chronic asthma and if he hadn’t had it, I truly believe he would’ve made it to the NBA,” Scottie continued.

Scottie went on to share how incredibly proud he was of his eldest son. “He never let that get him down, though—Antron stayed positive and worked hard, and I am so proud of the man that he became,” he wrote. “Please keep his mom, Karen [McCollum], and all of his family and friends in your thoughts and prayers. A kind heart and beautiful soul gone way too soon. I love you, son, rest easy until we meet again.” HollywoodLife reached out to Scottie Pippen’s rep regarding the devastating news.

Scottie welcomed Antron in November 1987 with his first wife, Karen McCollum. The NBA star went on to marry Karen in 1988, after Antron’s birth. They couple went on to divorce in 1990, after only a few short years of marriage. Seven years following his split from Karen, Scottie went on to marry Larsa Pippen, with whom he shares four children — Scotty Jr., born in November 2000, Preston, born in 2002, Justin, born in 2005, and Sophia, who the couple welcomed in 2008.