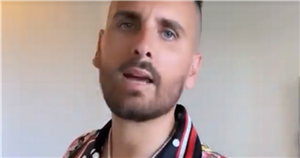 Scott Disick made sure he celebrated his 38th birthday in style as he gave out diamond encrusted necklaces and blinged-up Rolex watches to party guests.

The Keeping Up With The Kardashians star, who is set to turn 38 on Wednesday 26 May, started celebrations early with a luxurious party on Monday 24 May.

Scott, who said he would marry ex Kourtney Kardashian "right now" as she confirmed her romance with Travis Barker, showed off how he spoiled his guests with the luxurious party favours as Kim Kardashian filmed him.

The high-end gifts were handed out to Scott's a-list star guests including ex Kourtney and her sisters Kim and Khloe Kardashian as well as singer Sia.

As well as the glamorous favours, guests were also treated to food trucks, which handed out chicken and churros at the event.

Decorations for the swish party were more toned down than Scotts favours and included a balloon arch which donned the words: "Happy birthday Lord".

Meanwhile, there was large square cake for guests to tuck into. The sponge was decorated with black icing and a picture of a plane which was surrounded by the words: "Disick Aviation Happy Birthday".

The grand celebration and gifts certainly went down well with his friends, as Kardashian sisters Kim, 40, and 36 year old Khloe couldn't help but flaunt their bling on their Instagram pages.

Kim, who clashed with Kourtney after she "yelled" at her nanny recently, told her followers in a clip filmed outside: "I bet you guys want to know what Scott has for his party favours.

"That's what I want to show you guys. I've never heard of this before, party favours like this."

After stepping into Scott's house, where the expensive jewellery was laid out, Kim added: "So anyone can just walk in to here. If they're invited to the party."

Socialite Scott then boasted: "This is how Lord does it. I'm sorry that everybody gives out candy, but I give out ice and good ice."

Kim soon panned the camera around to show a security guard stood outside to make sure no one without permission entered the room.

Meanwhile, Khloe flaunted her bling in a video on her Instagram story as she a sparkling chain around her neck.

She told her fans: "Look at this necklace. Luxe VVS Jewellers. Is that not to die [for]? Look at that Cuban."

Khloe then switched the camera around to show the luxury watches laid out. She added: "Ballin'. Look at these diamonds, yes!"