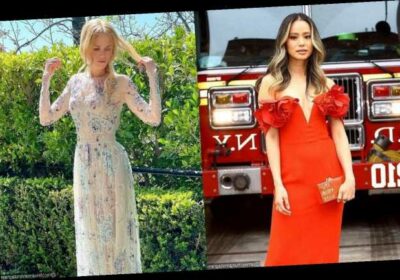 The ‘Big Hero 6’ actress shares an important message amid the rise of hate crimes against Asian-American as she arrives at this year’s event in a tangerine-colored dress from Oscar de la Renta.

AceShowbiz -The 2021 Screen Actors Guild (SAG) Awards took place at Sunday, April 4 at at the Shrine Auditorium in Los Angeles, California. Honoring performances in film and TV, the event handed out awards to the best actors in the industry. Prior to that, the stars hit the red carpet as they brought the best fashion at the big event.

Jamie Chung arrived at this year’s event in a tangerine-colored dress from Oscar de la Renta. The dress featured a cut out around the chest and the “Big Hero 6” actress paired the dress with shoes and clutch in a matching color. Additionally, Jamie shared an important message amid the rise hate crimes against Asian-American as she made a fashion statement with her clutch as the words, “STOP ASIAN HATE”, were written on it.

As for Nicole Kidman, the “Big Little Lies” actress looked stunning in a beautiful embroidery dress from Giorgio Armani Prive Spring 2021 collection. The wife of Keith Urban also dribbled in jewelry from Harry Winston. Meanwhile, opting for a green lime silver peak shoulders custom #louisvuitton dress was Viola Davis. For the night, the award-winning actress accessorized herself with a pair of dangling silver earrings.

“Bridgerton” star Rege-Jean Page looked dapper in a Luis Vuitton black suit and matching loafers. Kaley Cuoco also brought her best look for the award-giving event by donning a fuschia grown from Prabal Gurung gown, jewelry from messikajewelry and a pair of Louboutin heels. Looking chich was “The Crown” actress Emma Corrin. who opted for a gown from Prada that featured a seat belt around her chest and half-skirt accent over the lacy dress. She looked totally badass as she paired the style with boots.

The 2021 SAG Awards is currently underway.