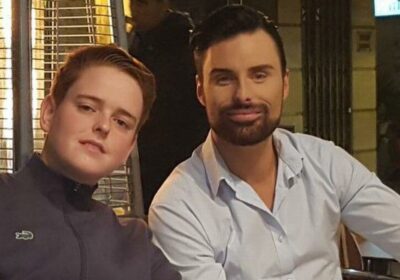 Rylan Clark-Neal has returned to social for the first time since news broke out that he's splitting from husband Dan.

The 32 year old, who previously branded the internet a "f**king sewer", took to his Instagram feed to share a picture of a white birthday cake with chocolate dripping down the sides.

In a second photo, the raven-haired presenter could be seen sitting in a pristine white shirt as he smiled alongside his nephew, who donned a black Lacoste jumper.

In the caption, Rylan wrote: "Happy 21st birthday weekend, Harvey. Can’t believe my little nephew is not so little anymore!"

Avoiding any mention of his recent split from 41 year old husband Dan, Rylan turned off the comments on the post.

The former X Factor contestant broke his silence over the break down of his marriage last week as he penned a post seemingly on behalf of both himself and Dan.

Thanking his 1.4million followers for their support during this challenging time, he wrote: "I just wanted to write a message to thank you all for the love and kindness you have shown us.

"We are currently prioritising our mental health and looking after the ones around us we love most.

"I am working towards getting back to the jobs I love in due course. Thank you for being patient with me."

Prior to this, Rylan issued a statement around Dan and his marriage in an attempt to clear up some confusion.

The statement, issued to The Sun, read: "Following reports about Dan and I spending time apart, I feel have to speak out as the way it is being reported is unfair.

"I have made a number of mistakes which I deeply regret and have inevitably led to the breakdown of our marriage."

Rylan, who had raised concerns after missing seven weeks of his radio show, added: "I have taken time away from work as I am not in a good place at the moment and am seeking help.

"I am trying to take each day at a time and would like to say thank you to everyone for their support and for respecting our privacy at this time."