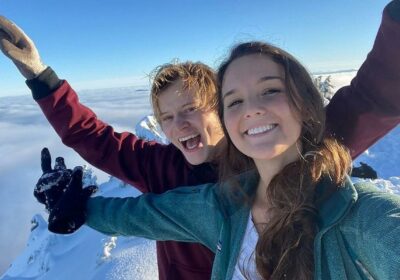 The ‘Outer Banks’ star has come to his girlfriend Elaine Siemek’s defense against the ‘disrespect and harassment’ on the internet, accusing internet trolls of spreading lies about her.

Rudy, who plays JJ on the Netflix series, shared his passionate defence of Elaine Siemek in a lengthy post over the weekend (06-08Aug21) to his more than five million followers.

Alongside a sweet snap of him and Elaine, Rudy called for the hateful comments and allegations to cease against Siemek, who reportedly works on the hit streaming series as an assistant.

“Unfortunately, I’m here to call out the disrespect and harassment someone who I love dearly is getting on a daily basis,” he wrote. “It has gotten to the degree where lies are being spread and accusations are being said that go beyond the normal ‘hate.’ “

He tagged Elaine, whose social media accounts are now private, in the post.

Rudy appears to be referencing posts on a Twittter account, @elamecancelled, where users troll his girl for her behaviour and her own social media posts. She has been accused of pulling her man away from fans at an event in July (21), leveraging her boyfriend’s fame to land deals with various brands, and using the N-word when she was in high school.

“Accusing someone you don’t know of being abusive and manipulative is not ok. Especially when you don’t know the relationship personally,” Pankow wrote in response to the online vitriol.

“I’m very happy in the relationship I’m in. know I might not actively show it on social platforms just how happy we are together, but this is my personal decision to keep most of those moments for myself. To those who are creating such displeasure and opinions about the one I love and my relationship, it’s time to stop.”

“The Politician” actor wrapped up his note by explaining he hoped to “spread positivity” with his message.

“In this era of social engagement and enlightenment, I want to express the importance to spread positivity and needing to know when it is unfair to express your own distaste for something or someone, especially when you can do it behind an anonymous identity,” he concluded.

“I… would be so grateful if we all would move forward in positivity and respect. All love, R.”