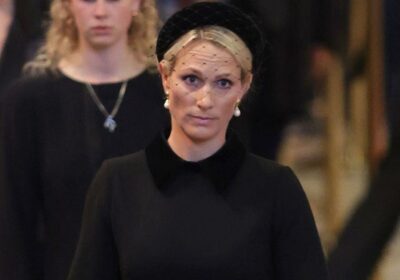 Zara Tindalljoined her cousins on Saturday evening at Westminster Hall tohold vigil for their late grandmother, the Queen.

The eight royals stood together in a ceremonial honour guard theday after their parents held an emotional vigilin the Palace of Westminster, with mourners filing past the group in silence.

Princess Anne’s daughter Zara donned a black dress with a matching headband and black stilettos for the emotional event.

For all of the latest updates, sign up for OK!'s Royal newsletter

However, many viewers were left concerned as she followed Prince William out of the procession and seemed to “stumble” up the stairs at the great hall.

As she made her way up beside her brother Peter, 44, Zara appeared to stop and search for something on the floor before continuing.

As the occurrence happened, eagle eyed fans took to Twitter to share their thoughts: “Did anybody else see Zara at the end there? Did she lose a shoe?”

Another said: “What was going on with Zara Tindall's walk? Shame, she was struggling & it looks like she lost her shoe.”

One Tweeter called the royal “relatable” as they shared: “Can we stop for a moment and appreciate the totally relatable moment Zara had on the exit, when she lost her shoe going up the stairs.”

This wasn’t Zara’s first time in Westminster Hall asyesterday she watched on while her mother, Princess Anne, stood guardaround the Queen’s coffin.

Zara, 41, was joined by her husband Mike, 43, to pay their respects at Westminster Hall after the procession from Buckingham Palace for the Lying-in State of Queen Elizabeth II.

As Zara and Mike walked into the ancient hall on Wednesday, she could be seen looking over to the former rugby player as he broke the silence during the procession.

Dressed in a black dress with a wide collar and black fascinator, Zara could be seen looking over to her husband as he cleared his throat during the silence in an “intimate moment”.

According to Kate Mansey, assistant editor of The Mail on Sunday: “As the procession got closer, obviously we couldn't see it in the hall, but we could hear the bells tolling and the drums getting closer and closer and inside the hall was complete silence."

She continued: "There was a moment of levity when Mike Tindall cleared his throat and Zara, kind of, shot him a look."

"It was very intimate actually," she added.