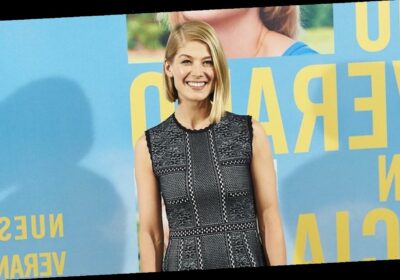 The ‘I Care a Lot’ actress would rather dig a hole in her back garden to hide her trophies because she finds it ‘awkward’ to show them off on the shelves inside her house.

AceShowbiz -Actress Rosamund Pike buries her awards in her back garden because she finds it uneasy to have them lying about the house.

The “I Care a Lot” star, who recently won her first Golden Globe, insists no one will find any accolade on a shelf in her home – or even in the toilet, where many stars display an Oscar or a Grammy.

“I just find it an uneasy thing to display any award in your home because how do people interact with them when they come home?” Rosamund shared during an appearance on “The Ellen DeGeneres Show“. “Do they say, ‘Oh, wow… those are your awards?’ “

“I think it’s awkward so I bury it in the garden with a little bit showing up, so you can have an enticing glimpse of a hand or the globe maybe.”

And she quite likes the idea of the future owner of her house digging up awards during renovation work, “In the future, when I’m dead and gone – or when somebody else buys the house – they’ll be landscaping and they’ll hit metal and they’ll think they found buried treasure and they’ll have in fact found a host of awards.”

“(They’ll) probably centuries ahead and they won’t even have them (award shows) anymore, so they’ll be relics.”

The actress won Best Actress in a Motion Picture – Musical or Comedy. She was celebrating alone in a hotel room when she was announced as the winner but, the following day when she returned home, her kids gave her a sweet surprise.

“The next day I went home and my sons, who knew I hadn’t yet received an award, had drawn me some very lovely pictures of it, which is almost better than the real thing,” she revealed.