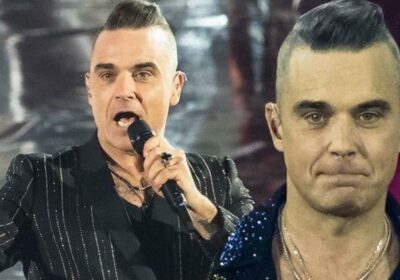 Robbie Williams, 47, has been in the spotlight for decades after debuting in the pop group Take That in 1990. However, along with his superstardom came the undesirable aspects of fame, including a terrifying contract to kill him.

Thankfully, Robbie’s connections made sure the heat to his life “went away”.

Speaking to the Mirror in an interview printed yesterday, Robbie said: “I’ve never, ever said this, but I had a contract put on me to kill me.

“I’ve never said that publicly before. It went away. I have friends.

“That stuff is the unseen stuff that happens when you become famous.”

Speaking on the astronomical proportion of his fame, Robbie explained that he was just a teenager when Take That started to gain prominence.

However, according to Robbie, fame had its downsides and contributed to the deterioration of mental health.

He said: “At one point in my life I was ridiculously famous, Michael Jackson-style famous.

“When I was 21 I left and then I had a solo career, sold 80 million albums, held the record for the most tickets sold in a day for a tour and blah, blah, blah…

“Extreme fame and extreme success meets with anxiety and depression and mental illness.”

Robbie recently opened up on his hair loss journey and the worry of no longer being “sexy” enough for fans.

The pop star admitted that the treatments he tried to grow back his hair have failed.

He told The Sun last week: “I am losing my hair.

“I am doing alright but when light shines on the top of it it becomes like a baby’s bum.”

Robbie also revealed he had “injections” but that after seven months, nothing has happened.

The singer tried to get a hair transplant but he was warned it would not work out.

He said: “I went to go and have a thatch, but the guy goes, ‘Bad news, your hair is so thin we cannot harvest it from there. It will do nothing’.”

The former Take That member also revealed how the issue affects his perception of himself when he performs for fans.

The musician added: “When I am on stage, and there is a 40 foot screen of me at the back and I am giving it the big’ un and doing the sexy and I am looking behind me – there is this guy with a double chin and no hair.