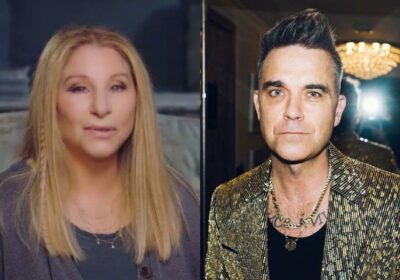 The former Take That member recalls his first meeting with the ‘Funny Girl’ songstress during a getaway, admitting he thought she was just a ‘nice old lady’ on holiday.

AceShowbiz –Robbie Williams and Barbra Streisand failed to recognize each other when they were introduced through mutual friends on Tahiti. He thought she was just a “nice old lady” on holiday while she mistook him for a footballer.

Robbie added about Barbra then mistaking his identity, “People were talking about Soccer Aid, and she just presumed I played football. And then I was like ‘Oh, no, no, no, I’m a singer.’ And she was like, ‘That’s nice.’ “

Robbie is one of the biggest selling singers in history, and in 2006 made it into the Guinness Book of World Records after he sold 1.6million concert tickets in a day. He is married to wife Ayda Field, 43, with whom he has four children – Theodora ‘Teddy’, aged nine, Charlton ‘Charlie’, seven, Colette ‘Coco’, three, and two-year-old Beau.

His new album “XXV” is out September 9 while a biopic about his life is being filmed in Australia, featuring Jonno Davies, 29, as a younger Robbie.