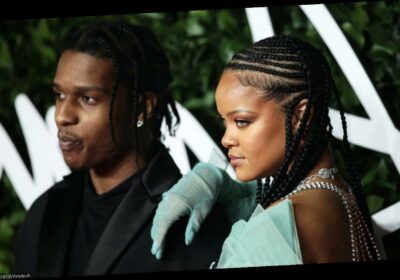 The ‘We Found Love’ hitmaker and the ‘F**kin’ Problems’ rapper are reportedly joined by a group of friends during the dinner date to honor his late business partner ASAP Yams.

AceShowbiz –Rihanna brought her sexiness to a recent date with A$AP Rocky. Less than a month after she was photographed vacationing together with the “F**kin Problems” rapper, the “We Found Love” hitmaker was spotted dressing to impress for a dinner outing with him.

The “Work” songstress and the A$AP Mob member ate at Italian restaurant Emilio’s Ballato in New York City, which was run by Emilio Vitolo Jr., Katie Holmes‘ chef beau, on Monday, January 18. While the MC was not caught on camera, the singer was seen rocking a half-unbuttoned yellow Bottega Veneta leather shirt that showed off a glimpse of her black mesh bra underneath.

Bundling up to brave the cold, the singer who took on the role of Nine Ball in “Ocean’s 8” was also seen layering her outfit with a brown YSL fur and a mesh Bottega Veneta coat that covered her ripped jeans. She completed her sexy look by rocking a black hat, a pair of white heels and a black face mask.

Offering more details of Rihanna and Rocky’s dinner date was E! News. “Rihanna arrived with a group of friends and met A$AP Rocky there,” the outlet quoted a source as saying. “They entered the restaurant through different doors and tried to be discreet. A$AP Rocky entered behind a bodyguard and ducked inside quickly. Once everyone arrived, they sat together with a group of friends.”

The source went on to note that the group gathered to honor the “Fashion Killa” MC’s friend ASAP Yams, who passed away in January 2015 at the age of 26. The latter’s fans and loved ones commemorate “Yams Day” every year to mark his death anniversary.

“Everyone gathered together for dinner and to share stories,” the insider went on. “There was lots of food passed around the table and laughter coming from inside. They stayed for over two hours before leaving separately. Rihanna left with friends and avoided being seen with Rocky.”

The outing came after Rihanna and Rocky were spotted vacationing together in Barbados back in late December 2020. In some photos obtained by The Shade Room, she was seen wrapping her hands around her rumored boyfriend’s waist on a yacht. At one point, she appeared to lean in to give him a kiss.

Despite being spotted several times during what seemed to be dates, both Rihanna and Rocky have yet to confirm their relationship.