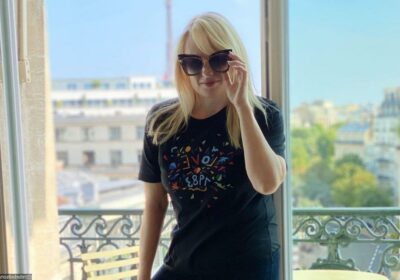 Having stumbled upon the snap she had with tennis ace Novak Djokovic in her emails, the ‘Pitch Perfect’ actress reasons that it was taken after her father passed away from a heart attack.

AceShowbiz -Actress Rebel Wilson is reflecting on a sad time in her life when she was really unhealthy – and she’s “so proud” of how far she’s come.

The “Pitch Perfect” star shared a photo of herself, snapped before her recent 65-pound (29.65 kilograms) weight loss, and it brought back bad memories of her father’s sudden death in 2013, at a time when she was already struggling with poor eating habits.

In the Instagram post on Wednesday, August 18, the funnywoman explains she stumbled upon the unflattering picture with tennis ace Novak Djokovic in her emails.

“Okay so I know that I normally post flattering photos of myself…,” she writes, admitting her first thought on seeing the photo again was “whoa!”

“I remember this was when I was at my most unhealthiest, being overweight and indulging way too much with junk food. Using food to numb my emotions [sic].”

“My father had passed away of a heart attack and it was such a sad time. I didn’t think highly of myself and wasn’t valuing myself how I should have.”

Rebel’s dad died when she was shooting her American sitcom “Super Fun Night“, but she was so distraught, she didn’t reveal his death until nearly a year later.

“It’s interesting that I’m still smiling and still trying to be active,” she adds, noting the sportsman is “such a nice guy.”

But she’s really happy she’s in a different place on her health and weight loss journey now.

“I look back now at that girl and am so proud of what she’s become and achieved,” she continues. “And just wanted to send out some encouragement to everyone out there struggling with weight or body issues or emotional eating. I feel you. I know what it’s like.”