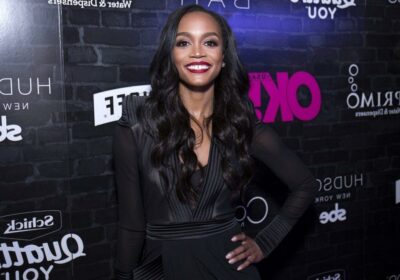 Rachel Lindsay has worked her way up in the entertainment industry, starting on The Bachelorette years ago and now interviewing high-profile celebrities on Extra. The former reality television lead got to do coverage for the Academy Awards this year, and a video on Extra‘s YouTube showed that she interviewed Minari Oscar winner Yuh-Jung Youn. Fans pieced together that Lindsay was the one to asked Youn the viral question: What does Brad Pitt smell like?

Firstly, Youn won viewers over in her role as Soonja, the grandmother, in Lee Isaac Chung’s Minari. The film followed a young Korean family living on a farm in Arkansas in the 1980s. It shed light on the difficulties trying to assimilate into daily life as immigrants in the United States.

Youn stood out in both her humorous and tender moments with the other actors in the film. She also served as an important catalyst in the film’s climax toward the end of the movie.

While Youn is credited on IMDb with 45 acting roles, this was the performer’s first Academy Award win. She won the Oscar for Best Performance by an Actress in a Supporting Role. Youn was also honored at the 2021 BAFTA Awards for Best Supporting Actress in Minari.

Youn was one of the last to receive her awards of the night. Pitt presented her category and introduced her on stage. The two were actually also connected through Minari itself — Pitt was an executive producer for the movie.

While many applauded Youn for being the first Asian actor to win in an acting category since 1957, a lot of the American press focused on her interaction with Pitt during her award acceptance when asking her questions.

One reporter’s viral question asked Youn what Pitt smelled like. Her answer was sarcastic and quick: “I didn’t smell him. I’m not a dog.”

Fans on Reddit immediately recognized Lindsay’s voice from Variety’s video clip of the interview. The clip, which has more than 4 million views, didn’t show Lindsay’s face.

Some fans of Lindsay’s were embarrassed about the viral question she asked. One said: “Oh my god, I saw people making fun of this question but didn’t realize it was Rachel. Oof.”

Another fan analyzed how the question might have been difficult for Youn.

“I’ve been thinking about this and I also feel like it really sets up Ms. Youn to potentially say something embarrassing in a moment that is supposed to be a cumulation of her life’s work,” one person on the thread wrote. “Especially because English is not her first language. I know she had a translator, but Korean is not always easily translated when sarcasm and humor references are involved.”

While the Variety video didn’t show Lindsay’s face, Extra did upload the interview on YouTube with Lindsay asking the first part of her question.

A representative for Rachel Lindsay did not respond for comment in time of the story’s publication.