Queen’s ‘fabulously wry’ humour, from a ‘fake dead bird’ to mimicry and a model pose 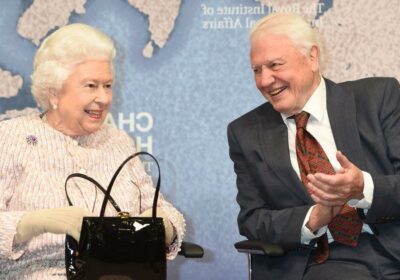 Her 70-year reign was often characterised by servitude and a stiff upper lip, but the Queen still found great joy in the lighter side of life.

Many of those who knew her best have paid tribute to her mischievous streak and sharp wit. As royal biographer Robert Lacey said, “She had a wonderful wry and dry sense of humour, and it was a very important ingredient of her identity.”

Figures from all walks of life have recalled her comic timing and love of a joke, with Sir David Attenborough saying, “If there was something funny she laughed in a genuine way.”

The 96-year-old broadcaster last worked with the late monarch in 2018 on The Queen’s Green Planet documentary, and he recalled her laugh as “the most precious thing. She wasn’t putting it on and that made it very easy.”

Sir Paul McCartney, who met her many times over the years also hailed her “fabulous sense of humour”. Reflecting on the time he received a Companion of Honour medal in 2018, the former Beatle said: “I shook her hand, leaned in and said, ‘We must stop meeting like this,’ to which she giggled and got on with the ceremony.

"I did wonder if I’d been a bit cheeky, but I have a feeling she didn’t mind.”

Baroness Floella Benjamin – who met the Queen many times – described the “twinkle” in her eyes whenever her face lit up with laughter, and ex-prime minister Theresa May had the House of Commons in fits of laughter when she shared a memory of attending a royal picnic at Balmoral.

May confessed that, as she carried a plate of cheese from a hamper, “The cheese fell on the floor. I had a split-second decision to make. I picked up the cheese, put it on the plate and put it on the table. And I turned round to see that my every move had been watched by Her Majesty the Queen. I looked at her.

"She looked at me. And she just smiled. And the cheese remained on the table.”

Justin Welby, the Archbishop of Canterbury, also spoke fondly of the Queen last week, telling the House of Lords: “She had a dry sense of humour and the ability to spot the absurd. The Church of England was very capable of giving her material. But she never exercised that at the expense of others.”

The Queen clearly used humour to lessen the weight of the crown. So much of her life was defined by strict tradition and state occasions, but as she once told former US First Lady Jackie Kennedy, “One gets crafty after a while and learns how to save oneself.”

The late Prince Philip shared her playful sense of fun, and humour was one of the foundations of their long marriage.

In footage from a 1995 visit to South Africa, the pair were seen giggling together while watching a dance display, and their rapport was also illustrated by a photo of them laughing as the Queen held baby Edward on the balcony of Buckingham Palace following the 1964 Trooping the Colour.

Memorably, in 2003, the Queen and Philip were also pictured chuckling as a swarm of bees disrupted an official Grenadier Guards review at Windsor Castle.

Photographer Chris Young captured the scene and said, “I got lucky. I recognised that it was a human moment. She was giggling like a little girl and he was laughing, too. I thought the reaction from both of them was pretty unique.”

William, the newly appointed Prince of Wales, once revealed the Queen and Philip’s shared love of unpredictable moments in the ITV documentary Elizabeth: Queen, Wife, Mother in 2012, saying: “One of the things they have loved over the years is when things go wrong.

"They absolutely adore it because obviously everything always has to be right, but when things go wrong they’re the first to laugh.”

Philip was known to love pranking members of the royal family, and the Queen enjoyed her fair share of playing practical jokes, too. Famously, she once duped two American tourists who stopped to chat to her and her protection officer Richard Griffins as they were walking near her Balmoral home.

They failed to recognise her and when they asked where she lived Griffins revealed the Queen said, “Well, I live in London, but I’ve got a holiday home just the other side of the hills.” Then when the pair asked if she’d ever met the Queen, she replied, “Well, I haven’t, but Dicky here meets her regularly.”

Over the years, one of the Queen’s favourite places to drop her guard and relax was the Royal Horse Show in Windsor, and in May this year she seemed to have bounced back from a series of health problems as she was seen smiling and joking at the prestigious event.

She also loved to attend the annual Braemar Gathering Highland games and was regularly spotted in the stands. In 2016, she and Charles were snapped roaring with laughter as they watched activities such as caber-tossing, Highland dancing and the tug-of-war.

At other times, she and Philip could be seen in stitches as they watched the traditional games.

The Queen was also highly self-deprecating. Before her death, BBC royal reporter Sean Coughlan told OK!, “She takes her role seriously, but not herself.”

That view has been echoed by many royal experts, with biographer Sally Bedell Smith, author of Elizabeth the Queen: The Life of a Modern Monarch, once revealing that she’d regularly “laugh at herself,” and would jokingly described her own expression as her “Miss Piggy face.”

The Queen’s dresser Angela Kelly was well-placed to catch her in off-guard moments and, recalling a photoshoot for the Diamond Jubilee in 2012, she told how Her Majesty was “slipping her hands in and out of her pockets and placing them on her hips, and mimicking the stances of a professional model”.

Kelly, who worked with the Queen for 28 years, added, “[We] felt we were experiencing something special, a moment never to be repeated.”

During a tour of Australia in 2006, Kelly played a prank on the Queen, convincing her that a toy kookaburra was really a dead bird. “She looked horrified. As she took the bird from my hands she realised I’d been winding her up. It was really a stuffed toy!” Kelly wrote in her book, The Other Side of the Coin: The Queen, The Dresser and the Wardrobe.

Close confidante Kelly also mentioned the Queen’s “wicked” sense of humour and that she loved to imitate TV stars and politicians. “She can do all accents – including mine,” she said.

The hidden talent was confirmed by former royal correspondent Charles Rae, who said: “She’s privately entertained members of her family with impersonations of various world leaders.

"Apparently she’s a very good mimic, and could have made a reasonable career of it.”

Known for her love of musicals, the Queen also liked a rousing sing-song and delighted guests at an official reception at Buckingham Palace in 2012 when she broke into a rendition of Sing, which Gary Barlow and Andrew Lloyd Webber composed to mark her Diamond Jubilee.

Her spirited nature was also showcased at the opening of the London Olympics that same year, when she appeared in a James Bond sketch with Daniel Craig. After greeting him at Buckingham Palace by saying, “Good evening, Mr Bond”, she pretended to parachute out of a helicopter onto the stadium below.

The Queen’s part in the stunt had been kept secret from the rest of the family, who assumed it was being performed entirely by a royal lookalike. When they realised the Queen was involved in the action they apparently fell about laughing.

Poignantly, just a day before the Queen died, Craig appeared on The Late Show in the US. When he was asked by host Stephen Colbert what the Queen was like he said, “Very funny. Very funny.” He also told how the Queen wisecracked about Craig’s famously stern demeanour, saying, “We were having our photos taken and she just went, ‘Oh no, he’s the one that doesn’t smile!’”

More recently, her cheeky side was evident during her Platinum Jubilee celebrations as she shared a pot of tea in a skit with Paddington Bear. In the clip, their mutual passion for marmalade sandwiches was revealed as she pulled one out of her handbag.

The pair were later shown drumming the beat of We Will Rock You on china cups with their spoons.

The Queen could also deliver a sharp one-liner. After facing eggthrowing protesters on a state visit to New Zealand in 1986, she quipped,“I prefer my eggs for breakfast.”

And, during a visit to the Chelsea Flower Show in 2016, when she was told lily of the valley was once used as a poison, she said, “I’ve been given two bunches this week. Perhaps they want me dead.”

She wasn’t averse to taking the mickey out of loved ones, either. When she first met her newborn grandson William she joked, “Thank goodness he hasn’t got ears like his father.”

As the world continues to pay its respects, it is evident the Queen never lost the ability to balance the heavy duty she bore over so many decades with taking enormous delight in the silly, the daft and the ridiculous.

That side of her character is one her beloved family will no doubt treasure for many years to come.