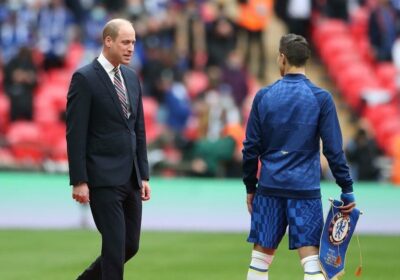 Prince William has been spotted out for the first time since his brother Prince Harry criticised their dad Prince Charles.

The 38 year old was seen looking downcast as he stepped onto Wembley Stadium on Saturday 15 May ahead of the Emirates FA Cup Final match between Chelsea FC and Leicester City.

The Duke of Cambridge looked dapper as he donned a black suit with a crisp white shirt and a red and blue striped tie alongside a pair of smart shoes.

William appeared to look downcast as he walked the red carpet to meet Chelsea's Cesar Azpilicueta.

London's Wembley Stadium was host to 21,000 fans for the match, where attendees had to undergo a Covid-19 test before arrival.

It's the first time Prince William has made a public appearance since his brother compared life as a royal as a "mixture between The Truman Show and being a zoo" and criticised his dad's parenting skills.

Speaking on Dex Shepherd's Armchair Expert podcast to promote his Apple TV+ series with Oprah Winfrey, called The Me You Can't See, the 36 year old explained that he uprooted his life halfway across the world to "break the cycle" of "pain and suffering" that's been passed down in his family.

Check out all the latest hot topics on OK! magazine’s news section and discover exclusive celebrity news about your favourite soap actors and reality stars.

We're also on Facebook.com/okmagazineuk – for the latest online celebrity news, features, galleries and videos throughout the day from your favourite site.