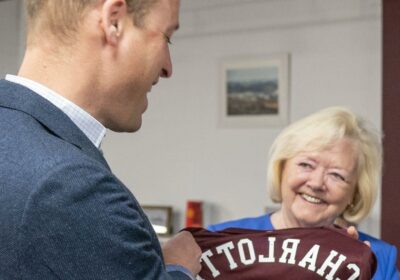 Prince William’s face lit up when he was presented with a lovely gift for his football-mad children George and Charlotte on Thursday.

The Duke of Cambridge, 39, was given Heart of Midlothian football shirts with the names of the youngsters on the back.

William was photographed beaming as he was handed the shirt. The visit was part of one of the Duke’s engagements on his second day in Scotland, where he and Kate are known as the Earl and Countess of Strathearn.

William will be especially thrilled with the gifts as he is a keen football fan who supports Birmingham side Aston Villa, who play in the Premier League.

Get exclusive royal stories straight to your inbox with OK!'s weekly Royals newsletter.

The Prince is president of the Football Association and while on the trip, he met Heart of Midlothian football club chief executive Andrew McKinlay and chair Ann Budge.

William went to Hearts to find out more about a mental health programme called The Changing Room.

It was launched in 2018 by the Scottish Association for Mental Health to promote mental health and wellbeing among men in their middle years.

During a 12-week course, football is used to bring men together to open up about any struggles they might be going through.

The project is being delivered to football clubs throughout Scotland to encourage men to be more comfortable when talking about mental health.

The Duke is aknown mental-health advocateand has previously spoken about his own methods for managing his thoughts which include going for walks.

William is part of another project called HeadsUp which involves working with Premier League teams to try to make talking about mental health as easy as talking about football.

A statement on the royal family’s website at the launch of HeadsUp read: “Heads Up – launched by The Football Association and Heads Together and spearheaded by The Duke of Cambridge – will harness the influence and popularity of football to help show the nation that we all have mental health and it is just as important as physical health.

“The campaign will strive to raise awareness, spark conversation and signpost support for those in need, with a crisis text support service established.”

Prior to travelling to Scotland, William and Kate Middleton, 40, visited Manchester where theypaid their respectsto victims of the Manchester bombing in 2017.